Earlier this month Neowin reported that Microsoft would be rolling out a new piracy check update for Windows 7. The update is said to check for 70 known activation exploits by checking the local PC. Upon realizing that a copy of Windows is not genuine, the program will change the user's desktop to black, leave a watermark showing that it's not a legal copy, and bug the user with notifications.

According to Engadget, the update is finally beginning to make its way to people's computers. The update is vaguely titled "Update for Windows 7 for x64-based Systems (KB971033)." For 32-bit systems, it will probably say "for x86-based Systems." Just check the KB number to be sure. This is the description of the update:

"This update to Windows Activation Technologies detects activation exploits and tampering to key Windows system files. These exploits try to bypass regular Windows activation and are sometimes included with counterfeit copies of Windows."

It's still unclear what the 70 activation exploits are. The update is listed as "Important" meaning it will be installed automatically to users who have enabled automatic updates. Users are able to deselect the update and not allow it to install if they wish. However, if you're not doing anything wrong to begin with, and you only use legit software, there's really nothing to worry about. 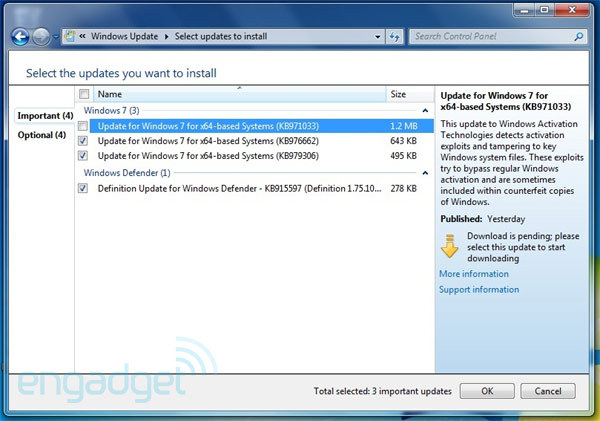