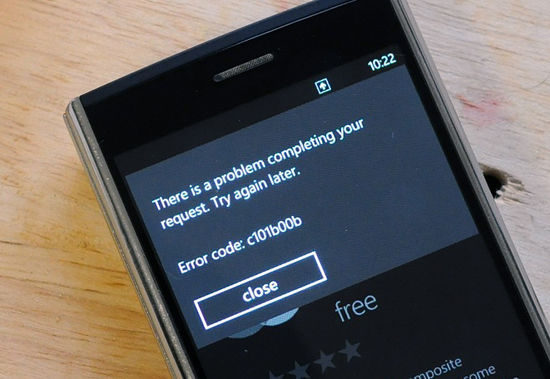 Searching twitter for the error shows that the problem is widespread and WPcentral also picked up on the trend and is also receiving the same report. The error report, being called by many as the 'b00b' error, is affecting those who are running Mango and NoDo.

It is not officially known why individuals are receiving this error, but one user speculates that it happens when the marketplace is taken offline, possibly in preparation of the upcoming Mango update. If true, it does seem a bit odd that Microsoft would intentionally take its service offline without informing the end users of the upcoming downtime.

Whatever the reason may be, the end result is that the service is not available to some consumers. Hopefully Microsoft is working to quickly resolve the issue, or even better, possibly they are making some final tweaks before the mass Mango roll-out which should be happening in the very near future.

If you are having any issues with the Windows Phone Marketplace, let us know in the comments below.