While Microsoft will release a software update for the Xbox One later this week, the company already has plans for a second update that will roll out in early March. Today, Microsoft revealed some more information about that automatic download. It will concentrate on improving the multiplayer and party experience for the console, which has received its share of criticism from hardcore online players. 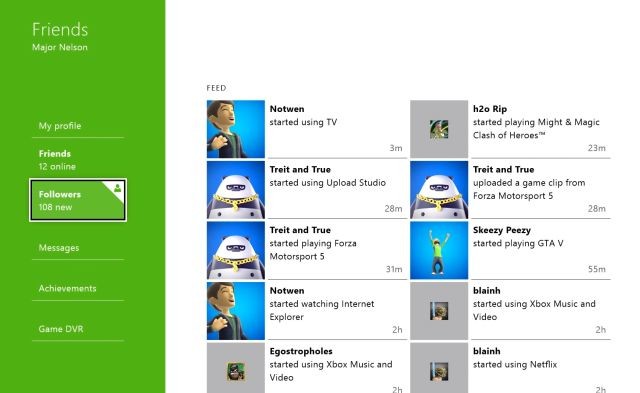 This screenshot is from the current friends list on the Xbox One.

In a post on Xbox Wire, Microsoft's Xbox Chief Product Officer Marc Whitten stated that when the March update is released, the Friends list on the Xbox One will be "front and center on the homepage of the Friends app." It will also allow owners to simply say "Xbox, go to Friends" to view the list, thanks to the Kinect hardware.

Fans will be happy to know that the Xbox One will also add an "Invite friends to game" option for all multiplayer games with the new update, along with a "Recent Players" list. Party chat will be turned on by default with next month's update and it will also be separated from the list of people who are playing the same game. Whitten said that more features for March's Xbox One update will be revealed in the coming weeks, along with videos that will show the new additions in action.