In a survey of 1000 British adults by Play.com, the iPad has beaten flowers and jewellery to become the most wanted Valentine's gift for 2014.

Traditional gifts still rank highly though as flowers came in at second, with jewellery third, but more modern surprises were in store at fourth and fifth with laptops and the Sony PlayStation 4 taking those spots respectively. 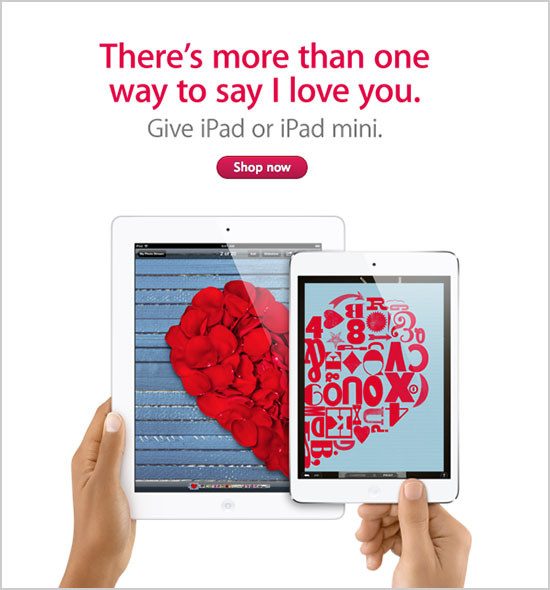 Saying "I love you" with cold hard cash, more like...

One in five of the adults surveyed who were older than 55 said they were hoping to receive an iPad from their loved one on Friday, whereas the majority of 18-24 year olds say they would rather have flowers, an unusual turnaround in the generation gap. One in ten also said that they hoped that their partner would spend £100 or more on them, although 43% of those involved in the survey said that they did not expect anything worth more than £10.

Many are unlikely to get the gift they want though, as shown by the table of 'expected gifts' (shown below), which is headed up by chocolate, flowers and clothes ahead of perfume and a weekend getaway. Despite this, 80% of the people surveyed said that they would not consider returning or exchanging the gift they received.

These events further show the allure of Apple's designer tablet as it has also been the gift of choice for many over the past few Christmases since the launch of the original iPad in 2010. However, its high price on even the lowest specification model means that many are unlikely to receive one this Friday.

Source: Play.com via The Daily Telegraph | Image via Apple