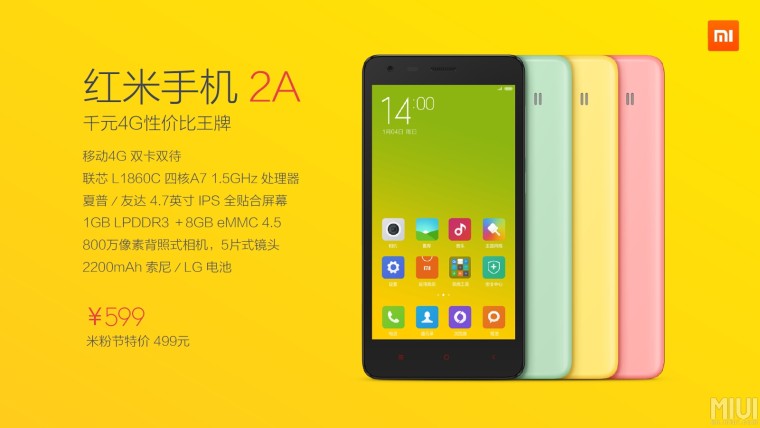 Not long ago, we reported about Xiaomi, a Chinese smartphone and tablet manufacturer, getting ready to unveil a new device by April 8th. As part of the company's ongoing event in China marking its 5th anniversary, CEO Lei Jun has unveiled today the Redmi 2A.

The Redmi 2A is a low-cost version of the Redmi 2, which was released last January. It features a 4.7-inch (1280x720) IPS display, and 4G LTE support. Under the hood, the device packs a quad-core Cortex A7 processor, 8 GB internal storage, which is expandable to 32 GB via microSD, and 1 GB of RAM.

It also has an 8-megapixel rear shooter with an LED flash, 2-megapixel selfie camera, and a 2,200 mAh battery. Lastly, the new device is dual-SIM capable, and runs Android 4.4 KitKat, with MIUI, Xiaomi's homemade user interface software on top.

Xiaomi has experienced a lot of success in the smartphone and tablet industry. The company has reportedly sold one million phones in India, and has even toppled Samsung as the number one smartphone manufacturer in China. Also recently, it has experimented with installing a Windows 10 ROM on its Mi 4 flagship device, though that effort has been community-driven. .