Earlier this year GEEKOM reached out to me asking if I was willing to give one of its Mini PCs a whirl and I accepted if I was able to test one of its later and beefier models, seeing as it also still sells a variant with 8th gen Intel i3, i5, and i7 CPU choices for under $500. I was only really interested in benchmarking a modern Mini PC with Windows 11 installed, believing such tests would benefit our readers.

Although I've seen Mini PCs before (I almost bought a Mac Mini as a second PC) I have never used one, so it was a learning experience for me too.

First up, below are the full specifications of this thing. I have bolded my configuration where relevant. 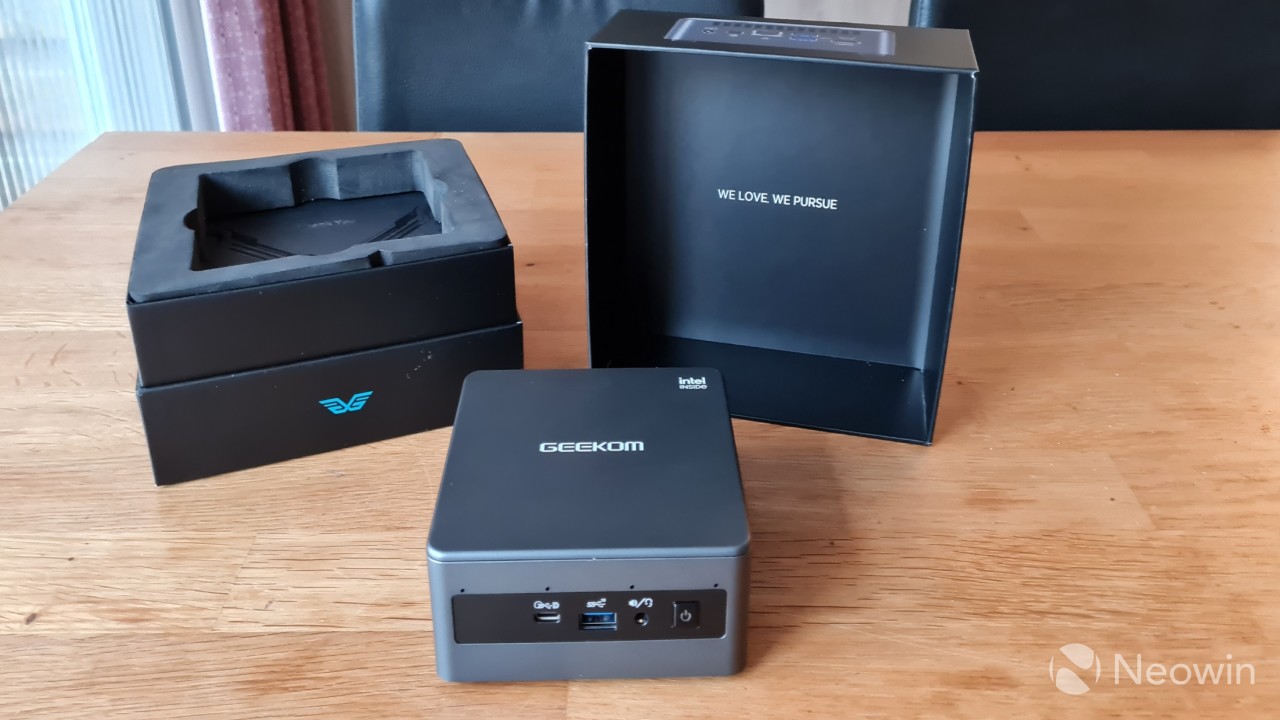 The packaging feels very premium and the top can be pulled off to reveal the Mini PC sitting inside a foam-cushioned interior. Once you have the PC out, and the foam is removed you are greeted with a Thank You envelop, below that after removing the cardboard "shelf" you can find the other components such as the power lead, HDMI cable, VESA mount plate with a bag of screws, and the instruction manual.

What’s In The Box

GEEKOM opted to ship an HDMI cable with the PC, unfortunately, there is no mini DisplayPort adapter, which means I had to order one because my setup is using DisplayPort via a KVM switch, and HDMI isn't really a convenient option. 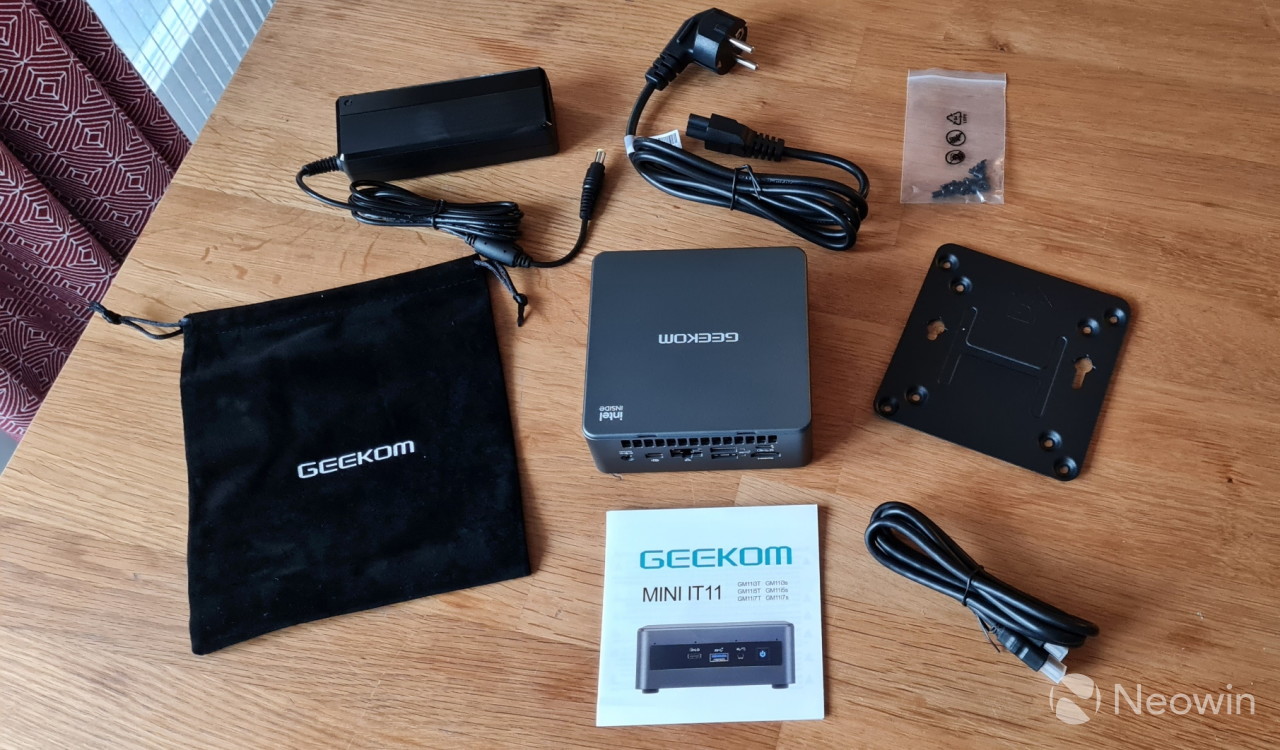 The Mini PC itself has a good heft to it, it certainly is not heavy, but it isn't light either, and it has a premium and balanced feel to it. All the edges and corners except for the bottom edges of the Mini PC are rounded, so it is comfortable to hold and move around. It is also good to see that there are two USB4 ports (Type C) one on the front and one on the back. The other three USB3 ports are also Gen 3.2, which is great.

As far as looks go, it is a fully matte exterior, so it's not a fingerprint magnet. It also feels like aluminum, but it actually isn't; it's a plastic shell that covers a metal frame. It doesn't feel cheap and isn't flimsy either, and even when the base is removed it remains sturdy.

Accessing the Mini IT11 is as easy as unscrewing the bottom plate with the four Philips head screws located in the center of each rubber foot, a small hobby screwdriver is enough for the job, but you may want to use a flat head screwdriver to prise the plate free, taking care not to damage the ribbon, which is connected to a full-sized SSD connector that can be added to a sled located on the backplate. Helpfully, the screws do not come loose from the backplate so that you won't lose them either.

As you can see from the above images which can be enlarged when clicked on, there is ample room to manage the SODIMMs and single 80mm Lexar NVMe SSD, so you can swap it out for something else if you want.

The backplate only fits back on one way, this is to ensure that the NVMe is always connected to the heat spreader. 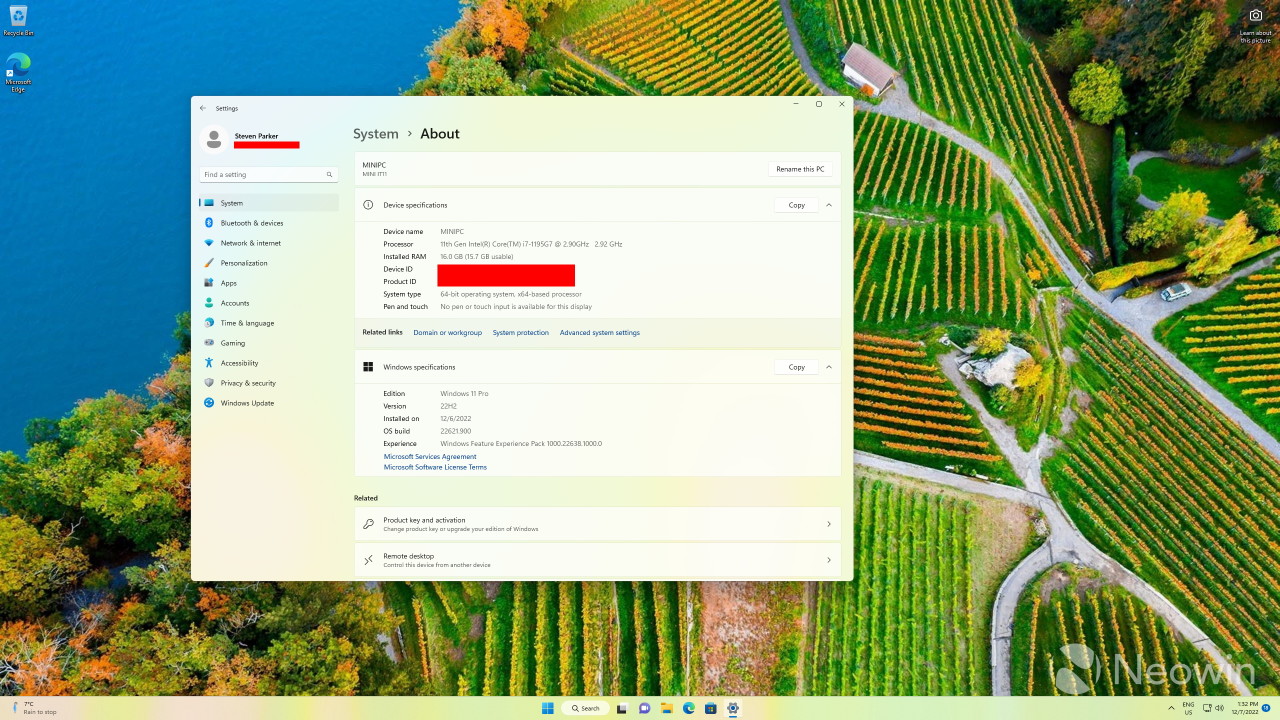 On first boot, you are prompted to complete the setup of Windows 11 Pro, meaning you do not have to fork out for a license, which is nice. After the setup is completed, I am happy to report that the Mini IT11 does not come with any bloatware installed. It ships with the original version of Windows 11 so I had to run some updates to get me up to the current 22H2 version.

Many people may not come across this, but I will mention it in case it does help someone troubleshoot an issue that I had with my main display, which is a Samsung CRG9 49" Ultrawide. I fully expected this modern Mini PC with an 11th gen Intel CPU and Intel Xe graphics to just work normally connecting through the DisplayPort (DP), but after switching out three cables, I was unable to get the display working properly, it kept glitching out.

On HDMI (GEEKOM ship an HDMI cable with the unit) I could only get a maximum of 60Hz at any screen resolution. Believing it to be faulty, after getting a replacement Mini PC through my contact, I was finally able to confirm that my screen only works fully through DP to USB4, which is a relatively new technology and supports DisplayPort 1.4a-based Tunneling. It is the only port which supports 5120 x 1440 @ 120Hz, but for the purpose of this review and screenshots, I have it set to 2560 x1440 @ 120Hz. Thankfully there are two USB4 ports, one on the front and one on the back, for the purpose of cable management.

The ports denoted with the red arrow above are what I ended up using with my Ultrawide. It's unclear why the screen won't work fully on HDMI or DP, since Intel says on its website that it should support max 4K (HDMI) and 8K (DP) @ 60Hz while my screen is only a max of 2K @ 120Hz.

It's actually physically possible to attach four screens to the Mini IT11 using the DisplayPort, HDMI and the two USB4 ports if you wanted. Regarding connectivity, there are also two USB 3.2 gen 2 ports and a barrel port for power on the back. Around the front, there's another USB4 port, a USB 3.2 gen 2 port and a port for a 3.5mm headphone jack.

As you can see from the two images above that, you can affix a Kensington lock on one side and insert an SD adapter for a micro SD card on the left side of the Mini IT11.

My Main PC consists of the following:

For the benchmarks, I used 3DMark, PCMark 10, Geekbench, and Cinebench. 3DMark Time Spy tests gaming capability with DX12 graphics performance. PCMark tests are a mix of CPU and real-world productivity tests, such as using an office suite, web browsing, light photo/video editing, and making conference calls. Cinebench stresses the entire CPU as it is a multi-threaded rendering test. Finally, Geekbench is a synthetic benchmark that is great for a quick look at the potential performance across a wide range of workloads.

I also tested the SSD's capability using AS SSD and CrystalDiskMark.

Despite running all of the above benchmark tests, the Mini IT11 did not get hot to the touch and there were no annoying noises coming from the single fan that cools the unit.

One thing that is clear from using this Mini PC is that it isn't a gaming PC, you will not be able to enjoy graphically intensive games on it, but it absolutely is suited as an office workstation, or perhaps a good solution for a student with limited living space with the ability to pack this away after every use. This thing isn't taking up much room, you can even screw it to the back of a screen if it has VESA support with the included mount plate.

In a world that is apparently too stingy for phone manufacturers to include a power lead and charger for their flagship phones, GEEKOM has provided all of the cables and tools necessary to get started straight away, along with a Windows 11 Pro license and a clear guide with instructions on how to access the internals. There's even a carry bag included.

Assuming you've made it this far, yes at $749, the Mini IT11 is a hard sell if we consider that there are plenty of other cheaper (AMD) options available on the market for around $200 less, the BEELINK SER5 is one such example, and which also came out in the summer of 2022. However, considering GEEKOM is already discounting the MSRP by $100 on its own site, and then knocking off an additional $60 until the end of the year, the Intel solution suddenly looks enticing at $589. Plus it becomes clearer what you are paying for when you realize that the AMD option does not include USB4, a Displayport, an SD Card slot, or even a Kensington lock and more.

It also has to be said that the starting price (without promos) is $519 for the Intel Core i5-1135G7 variant, but the rest of the specs remain the same as our test machine. As I said earlier, the decision ultimately comes down to what you're willing to pay for the options you need. This Mini PC will connect to virtually any display type, whereas cheaper solutions will be limited to HDMI. 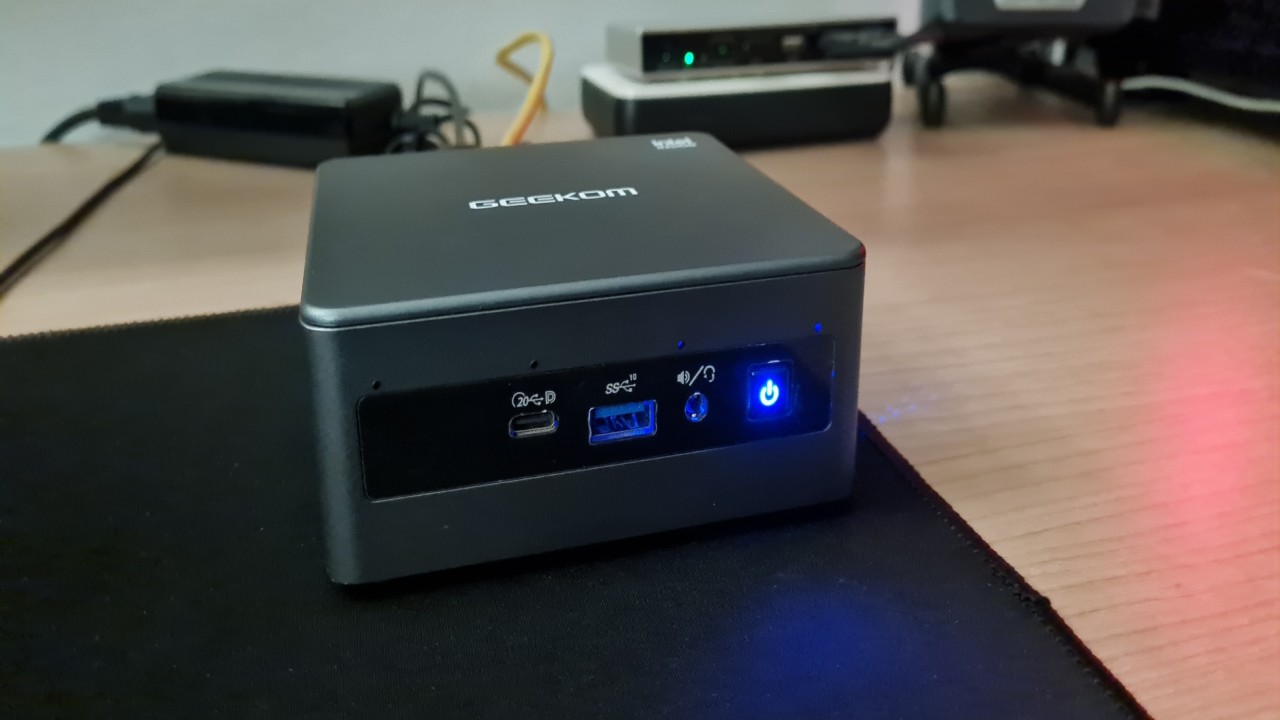 GEEKOM also let us know that until December 30th they are running a promotion where you can save $60 off the version I tested, that's the i7-1195G7 with 16GB RAM and a 512GB NVMe for $589 using code: XMIT11A upon checkout. You can also bag the 1TB NVMe and 32GB variant for $709 using the same code. Both Mini IT11s also ship with a free wireless keyboard and mouse throughout the promotional period.