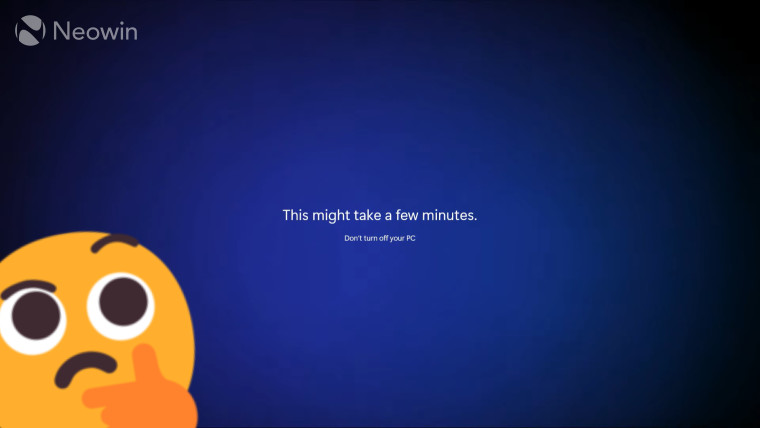 If you've read some of my writing on Neowin, you probably know that I'm a big advocate for making Windows more transparent to the end user. I have talked before about how Microsoft should consider adding more information about patches in the Windows Update page and have also argued at length that there needs to be more transparency in the Windows development roadmap.

Today, I'm going to throw another idea into the mix, so bear with me. Remember how when you're updating to a new version of Windows, you get a few brightly colored screens saying stuff like "Getting things ready", "This might take a few minutes", "Almost there" etc. for a few minutes while the update is being installed?

Well, I think those need to go in Windows 11. I'll explain why I'm being specific about Windows 11 in just a bit, but first, I want to talk about what needs to replace those screens. Wouldn't it be much better if rather than showing colored screens with meaningless fluff text, Microsoft actually told you what an update includes?

Imagine that you're installing the Windows 11 2022 Update (version 22H2) and rather than reading lengthy articles on Neowin about what the update packs (we would still appreciate you reading, by the way!), Microsoft just showed you some useful graphics about changes to the Start menu, Task Manager, accessibility, and more. Like, have a screenshot of the redesigned Task Manager and explain using arrows and other graphics about all the nifty improvements.

I feel like there could be multiple advantages to this approach. The first would be that it would be much more useful than seeing pointless phrases like "Getting things ready". Right now, the update messages read like "Hey, we installed lots of stuff on your computer... but we won't tell you about it, figure it out yourself!"

If you want your users to actually use the features that you added, it's worth emphasizing their presence rather than just hiding them behind some menu or obscure UX interaction and just hoping that they find it. If you want people to use Teams on Windows 11 and have even added new features to it, why not shout it from the rooftops about it while Windows is being updated? Want people to use and see the benefits of Widgets? Tell them about it.

Of course, you could argue that most people probably don't sit in front of their PC while it's being updated but my counter-argument would be that it's because of this lack of meaningful information or purpose that nobody sits in front of an updating PC. Why should you sit there for 30 minutes when all it says is "Getting there, do not turn off your PC"?

This leads me to my second point, you need to drum up excitement for people who are installing updates. They need to know that an update is worth it and they aren't just wasting their time. This would not only encourage them to install future feature updates but might even bring some positive reinforcement for installing security updates in a timely manner.

I've talked before about how Windows 11 excites me from time to time, but I'm a tech-savvy person who tries to live and breathe Microsoft news on a daily basis. This feeling needs to be downstreamed to the Average Joe in the masses, people need to know what they are getting with an update and how they can be more productive with it.

Now, to cap off this piece, I'd like to circle back to why I only mentioned Windows 11 at the start for this particular change. This is because I feel like this should only be used for feature updates or "Moments" updates that introduce consumer-facing changes. Your Average Joe could be excited about a tabbed File Explorer, but they couldn't care less about a backend "KB12345" change made for Windows 10 version 22H2.

We still don't know if Windows 10 is getting any major features with version 22H2 later this month and it's less likely that it will receive any moving forward too, considering that development focus has shifted to Windows 11.

For relatively minor feature and security updates, Microsoft can just have some text on the update screen which reads "Go to Windows Update in Settings after the update installs to find details about all that is new".

I know that something like this isn't ground-breaking and it won't set the world on fire, but I stand by my original stance that if Microsoft wants people to knowingly and willingly install Windows updates and actually be excited about new functionalities, they need to convey this to the consumer without being intrusive. And leveraging the otherwise useless colored update screens would be perfect to achieve this purpose.

What do you think about Microsoft implementing something like this during the Windows update process? Let us know in the comments section below!