Now that Windows Phone 7.5 – or Mango, to its friends – is here, the first wave of new handsets running the latest version of Microsoft’s mobile OS are starting to arrive. HTC’s stylish Radar and mighty Titan have recently gone on sale; Samsung recently announced its Focus Flash and Focus S devices for the US, and its mid-range Omnia W for other markets; and LG recently announced its new E906 handset, in conjunction with minimalist fashion designer Jil Sander.

Although Dell appears to be taking a step back from Windows Phone production, for now at least, other manufacturers are preparing to launch their first devices on the platform, including ZTE, which recently announced its WP7 debut with the Tania; and Acer, which will shortly release its first Windows Phone, the Allegro.

Telecompaper reports that Acer has confirmed its plan to put the device on sale in Europe before Christmas, and that it will carry a budget-friendly price tag of just €299EUR (just over $400USD or around £260GBP) off-contract. To put this into perspective, the manufacturer's suggested retail price (MSRP) in many European markets for HTC’s new Titan is double that, at €599 ($800/£520).

But does the aggressive pricing of the Allegro mean that compromises have been made in its design or specification? So far, Acer hasn’t publicly issued any confirmation about the Allegro’s spec list, but the company did reveal a Windows Phone during the summer at Computex called the W4 (also known within Acer as the M310), before showing it again at IFA in September. 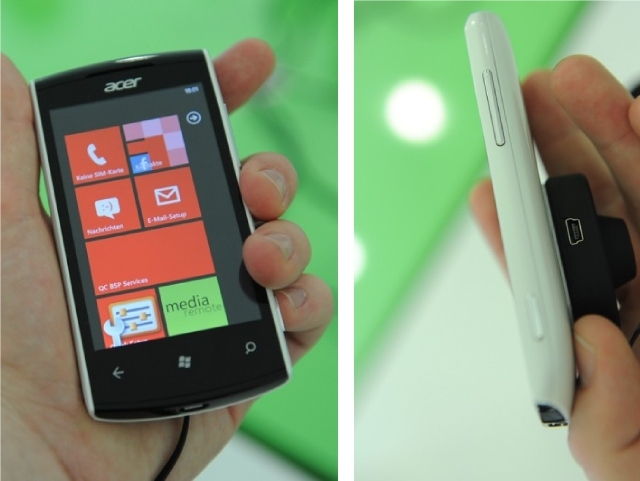 Acer's W4, on show at IFA in September. Images via Engadget.

That device’s specifications were fairly unremarkable for the second-generation Windows Phones, with a 3.6” WVGA display, 1GHz Snapdragon and 8GB of storage, along with the usual suspects such as Wi-Fi, Bluetooth and A-GPS, and a 5MP camera. It also includes DLNA media streaming with compatible devices, and Acer’s FastCharge system which claims to offer an accelerated battery charging facility when the handset is connected to an Acer computer.

Acer has previously confirmed its plans to launch the W4 with Mango, so it would certainly make sense if that model has become the Allegro that the company is now getting ready to put on sale.

The availability of new Windows Phones at more accessible price points will be an important part of increasing the market share of the mobile operating system, which has so far seen sluggish sales. Acer won’t have this end of the market all to itself, though, as Nokia has declared its intention to compete at the entry level with some of its new Windows Phones too, the first of which are expected to launch later this month.