The appearance of Intel's 400-series chipset motherboards in the EEC database, a few months ago, meant that some, if not all, of those motherboard models would be launched in a few months time to accompany the upcoming Comet Lake-S desktop CPU lineup. Today, it looks like that entire lineup of Comet Lake-S has allegedly been leaked by 'Informatica Cero', who apparently was able to get its hands on slides from Intel that detail the names and clocks of the 14nm Comet Lake-S desktop SKUs. 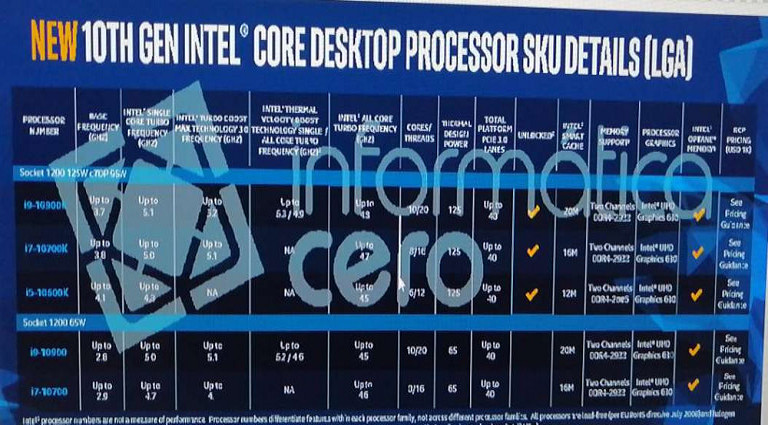 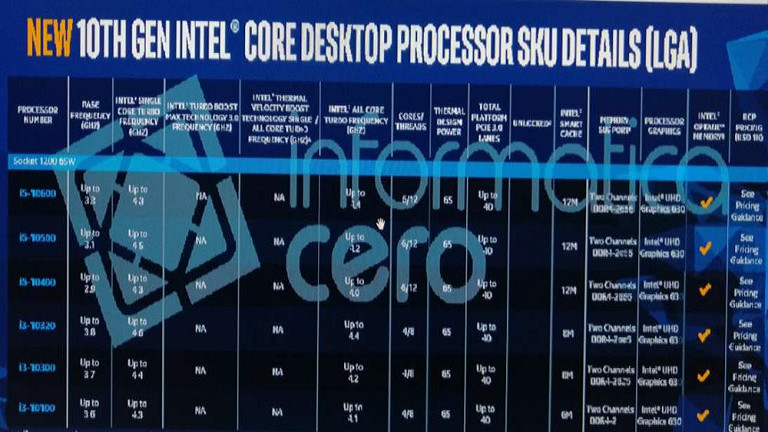 Videocardz has also shared information on some more slides which were later removed by Informatica Cero. These outline the overall features of the Comet Lake-S lineup:

As of now, it's not clear how the new "Thermal Velocity Boost" technology will function, though it might be similar to how AMD's eXtended Frequency Range (XFR) technology works. It is apparently present only on the Core i9 models.

Roughly two months back, prolific leakster 'APISAK' managed to spot the Intel Core i3-10100 on the SiSoft Sandra benchmark database and the processor is also present on today's leaked slides. The exciting aspect of the Core i3-10100 is the presence of hyper-threading technology making it an eight-threaded processor. This was the first of such leaks, as a couple of other 10th gen models have also been spotted since. These include another i3 model dubbed Core i3-10300 as well as an i5 model dubbed Core i5-10600. The presence of hyper-threading on i3 means that Intel is looking to one up AMD's current Ryzen 3 lineup.

Below is a summary of the the entire leaked lineup of desktop Intel Comet Lake-S:

Although still on 14nm, it is rumored that the new Socket LGA 1200 will be introduced in order to provide more power to the Comet Lake-S processors due to the higher TDPs compared to Coffee Lake-S. No information on pricing and availability was present on the slides, though we could expect to hear more at CES 2020.