Amazon held a special hardware event today, and it's served as the stage for a ton of products in its Echo family, as well as outside of it. These include new Ring cameras, a new eero router, and even a smart oven.

First, the company introduced the new Echo Dot, which is mostly the same as last year's model, except it now has LEDs on the side to show you the time. This is because, apparently, Alexa gets asked what time it is at least a billion times per year. The new display can also show alarms and the temperature, and if you use it as an alarm clock. tapping the device will snooze the alarm for a few minutes. Pre-orders start today for $59.99.

Amazon also announced a new refresh of the regular Echo, which was last refreshed in 2017. It has the same audio architecture as the Echo Plus, including neodyimium drivers, a three-inch woofer, and increased back volume for better-sounding bass. It also adopts the fabric-covered design language that Amazon started using last year. It comes in Charcoal, Sandstone, Heather Gray, and a new color, Twilight Blue. It's now available for pre-order for $99.99. 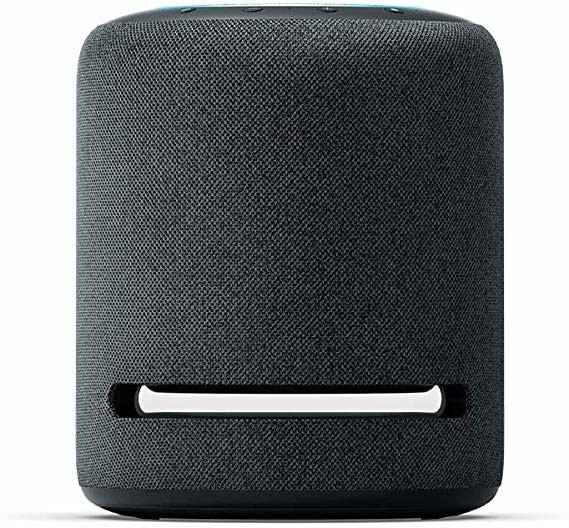 Another new device is the Echo Flex, a cordless mini speaker that plugs directly into a wall outlet. It's meant for users to stay connected with Alexa in any division of the room, even if they might not necessarily need the best audio quality or most complete feature set. It has a USB port, so you can still use it for charging a phone, for example, without using up more outlets.

It costs just $24.99, and the USB port can also be used with third-party accessories, such as a smart nightlight and a motion sensor. These accessories cost $14.99 each, but Amazon hopes developers will create more in the future.

Moving on to smart displays, Amazon announced the Echo Show 8. The 8 isn't an indicator of the number of times the hardware has been refreshed, but rather of its screen size, which falls somewhere between the Echo Show 5 and the original 10-inch Echo Show. In terms of audio, it should be similar to the Echo Show. The Echo Show 8 is also going up for pre-order today, and it'll cost $129.99.

Amazon also introduced the Echo Glow smart lamp "for kids" today. It's a multicolored lamp powered by Alexa, so users can set it to any color they prefer. They can ask for a flickering campfire effect, or to cycle through all the colors of the rainbow. A Sleep Timer option can also make the light get dimmer as sleepytime draws closer. Soon, party effects will also be available. The Echo Glow lamp will cost $29.99, and it's available for pre-order from today.

Moving onto wearables, Amazon today announced the Echo Buds, its first true wireless earbuds which, of course, come with Alexa integration. The buds use armature drivers for high-quality sound, they include active noise cancellation, and they last 5 hours on a single charge, with an additional 20 hours provided by the charging case. The Echo Buds are available for pre-order today for $129.99, and start shipping in October.

For its most dedicated fans, Amazon also announced Day 1 Editions today, which is a program where consumers can get access to the company's latest products in limited volume. This essentially means Amazon can create somewhat experimental products and see how they're received.

Kickstarting the program are the new Echo Frames, which are just regular glasses with Alexa built-in, though they can also work with Google Assistant. This integration is only audio-based, so there's no display or anything else here except direct access to your preferred digital assistant at any time. The glasses don't include a prescription, but you can add one if you want to replace your current glasses.

The other device that's part of this program is the Echo Loop, which is a similar concept, except it's a ring you put on your finger. It has two microphones, a small speaker, and a haptic engine so it can vibrate for notifications and the like. There's also an action button to interact with Alexa, or make a phone call to a previously-chosen contact.

Moving away from the Echo brand, Amazon had a few more things to share. From the recently-acquired eero, there's a new router that features the same dual-band and TrueMesh technologies as its predecessors. Mesh Wi-Fi helps cover every area of the house more easily, though you'll need multiple routers to achieve that. You can get the all-new eero from today for $99.99, or buy a pack of three for $249.99. It'll arrive in Europe next month.

The Ring team, which is also a relatively recent acquisition by Amazon, is also launching some new products, including a refreshed Stick-Up Cam with 1080p video, motion sensing, and night vision for just $99.99. It's pretty versatile, and it can be used indoors or outdoors, running off of an internal battery, an outlet, or solar power (though this requires an accessory).

There's also a new Ring Indoor Cam, which is available right now and costs just $59.99, the cheapest Ring camera on the market. As the name implies, it's only meant to be used inside the house. The Stick-Up Cam is only available for pre-order, though.

For homes that already have security systems that may not be in use, Ring also announced a Retrofit Alarm Kit to bring those systems back to life with Ring Alarm. The kit will cost $199.99, and you can bundle it with a Ring Alarm Hub for $375.99. Ring also announced it's working on a dog tracker called Ring Fetch, which will help users know if their pets are safe, but that's coming later on.

Finally, Amazon is also launching its own branded microwave oven, the "4-in-1" Amazon Smart Oven. It's a microwave, convection oven, air fryer, and food warmer powered by Alexa, which will help you cook by offering presets for certain kinds of foods, reminding you to stir the food, and letting you know when it's done. You can also scan barcodes for foods to have the cooking instructions be loaded onto the oven.

The Amazon Smart Oven will cost $249.99 with an Echo Dot and it's available for pre-order today.