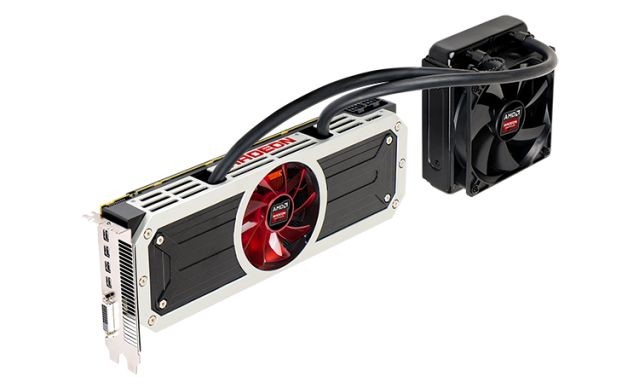 Just a few days after NVIDIA announced plans to release a $3,000 consumer graphics card, the GeForce GTX Titan Z, AMD has officially revealed its own super high end product in this market. The Radeon R9 295X2 comes with not only two GPUs but with its own liquid cooling system.

AMD's blog post states that the card's two Radeon R9 290X GPUs have a clock speed of up to 1018 MHz. This allows the card to run graphics intensive PC games like Crysis 3 at 30 FPS with a screen resolution of 3840x2160. It also support's AMD's new Mantle graphics API which is supposed to offer better performance for games that support it like Battlefield 4 and Thief.

The card itself has a "powder-coated machined aluminum shroud punched with industrial rivets" and a "full-length, solid metal backplate" that helps to keep the card stable along with offering better heat dissipation. The most unique feature of the card is the built-in liquid cooling system which AMD co-developed with Asetek. AMD says:

In the design we selected for the Radeon R9 295X2 , an integrated pump and waterblock assembly sits atop a high-turbulence plate. There’s one assembly for each chip on the board. To cool the loop, we selected a 120x120mm single thick radiator in a push configuration.

The AMD Radeon R9 295X2 will go on sale as a stand alone product later in April for $1,499. Some PC makers such as Maingear are already selling systems that will include the card inside those rigs.