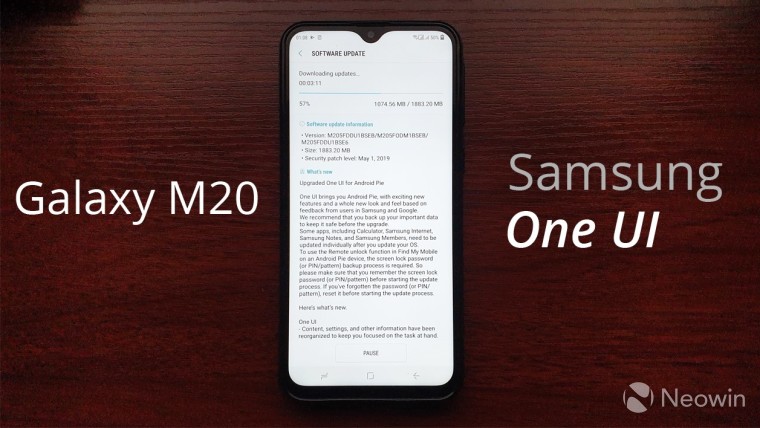 Samsung launched the M10 and M20 range of mid-range smartphones in India earlier this year, along with the M30. While the phones shipped with Android 8.0-based Samsung Experience UI out of the box, the company did promise that those devices would receive Android Pie 9.0-based One UI. However, in what was a surprise for many, the company announced that the M-series smartphones would begin receiving the update on June 3, earlier than the promised August rollout schedule. However, the update already began rolling out to the M30 a couple of days ago.

Today, the M20 too has begun seeing the OS update that brings with it Samsung’s One UI interface based on Android 9.0 Pie. The over-the-air (OTA) update is around 1,883MB in size and includes firmware version M205FDDU1BSEB/M205FODM1BSEB/M205FDDU1BSE6 -depending on the device -, along with the May 2019 Android security patch. One UI, Samsung’s refreshed take on its version of Android, brings with it many new features and changes, including a reworked design language that improves reachability on tall phones, a system-wide dark theme, gesture navigation, improvements to settings, and much more.

Users should begin being prompted of an impending update when it becomes available for their device. However, to manually pull the update, you can head to Settings and manually check for updates from the ‘Software Update’ settings menu. It is to be noted, however, that the update might still be staged for rollout and might not show up on all devices right away.