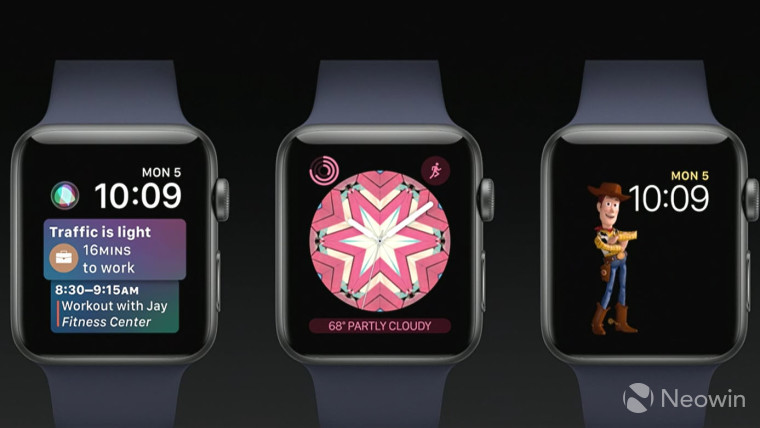 Apple has shown off watchOS 4 at WWDC 2017. It will bring a few new Toy Story and Siri themed watchfaces. The Siri watch face aims to be useful for users as well as offering the time. Watch wearers can now glance down at their wrist to find out information that might be useful in the moment such as how busy the traffic is, or if there’s an upcoming event in your calendar.

As for the Toy Story watch faces, you can either choose to have Woody, Buzz or Jessie standing by the time, but they’ll likely be a little less useful than Siri. If you rotate the crown you can pull up the kaleidoscope watch face.

Aside from watch faces, there are new animations and updates to the in-built apps, including the fitness app which has a whole new UI. With with watchOS 4 there is high-intensity interval training which lets you switch from exercise to exercise. Additionally, the fitness app now allows users to start a playlist when you begin a workout, the swimming workout have gained some improvements including automatic sets.

Apple Watch will now be able to use near-field communication to interact with gym equipment to pull stats such as incline and speed. This marks the first time that Apple has users NFC for something other than payments.

Other noteworthy mentions in this update are the improvements to music management, the inclusion of a news app, and activity notifications. In watchOS 4, Apple Music playlists are imported automatically based on what you listen to, several playlists are supported in the update. With the update, you can navigate through the album art by turning the Digital Crown. The news app is self-explanatory, with it you’ll be able to get all the headlines right to your wrist. Lastly, Content that is displayed in the Activity app will be pinged to you via a notification whenever new items become available.

The update is expected in the fall of this year for all Apple Watch devices.