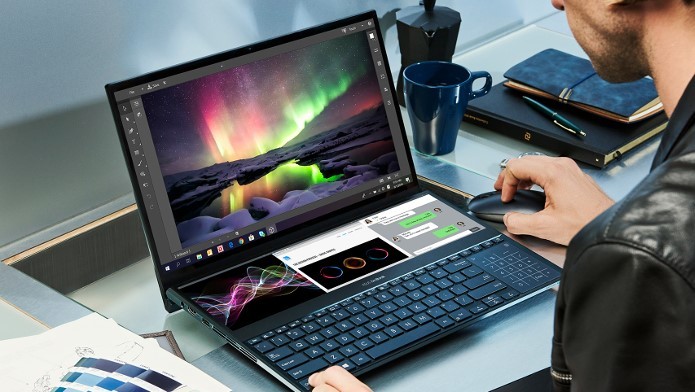 ASUS has come up with a couple of interesting ideas for laptops sporting more than one screen recently, with the first introduction of the ScreenPad last year, a concept which has been expanded upon in some of this year's laptops. But the company has something even more interesting up its sleeve at this year's Computex, with the reveal of the Zenbook Duo family of laptops, which have a large secondary screen - called ScreenPad Plus - above the keyboard.

The products seem to be an iteration of last year's Project Precog, which featured two similarly-sized screens on both halves of the laptop. The Zenbook Duo family instead keeps the keyboard and trackpad, pushing them down closer to the user. Above them is a secondary display which has the same width, but about half the height of the main one. 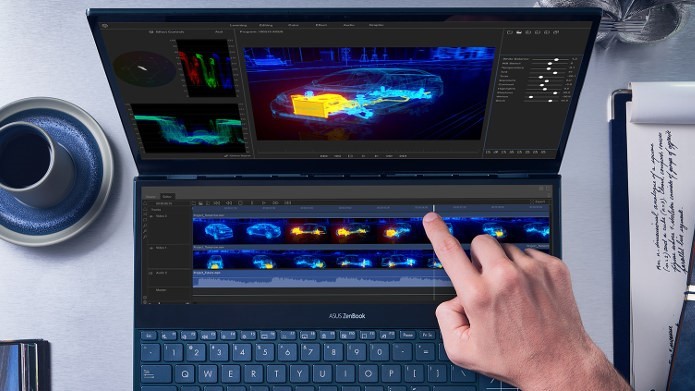 The screen isn't just running custom ASUS software, instead being able to be used as just another display for your Windows 10 workspace. It has the same pixel density as the main display, so you can move windows between the two screens without much visual disruption. The secondary display can be used for multitasking in a variety of scenarios, like browsing the web while having a video play on the second screen, typing a document on one screen and using the other for reference, and so on. There is some ASUS software here though, including a quick app launcher and a feature that lets you snap up to three apps side-by-side - whereas Windows 10 alone can only have two apps split horizontally (though you can split the screen into four quarters).

Both the main display and the ScreenPad Plus support touch, too. On the Zenbook Duo Pro, both panels feature 4K resolution, though naturally, the lower screen is not as tall. The downside here is that the main display uses OLED and has a glossy finish, while the lower screen is LCD and uses a matte finish. If you value consistency, the smaller Zenbook Duo uses LCD matte panels for both displays, with the downside that they're only Full HD. 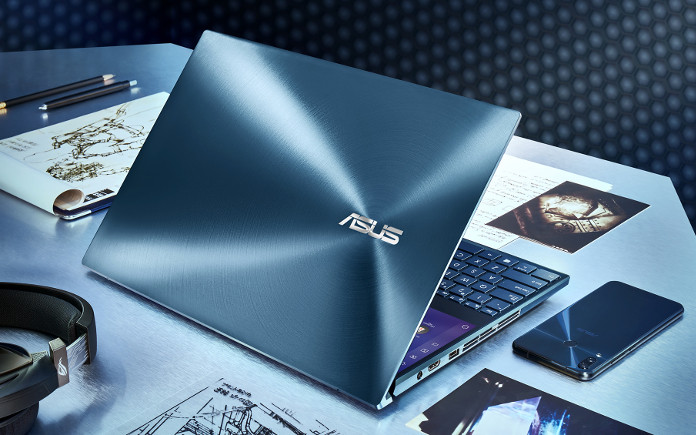 Aside from the unique form factor, the two new laptops pack pretty good specs. Specifically the Pro version comes with up to an Intel Core i9-9980HK, which is an eight-core processor that can be overclocked up to 5GHz, and it also has Nvidia's RTX 2060 GPU. It supports up to 32GB of DDR4 RAM. It offers one Thunderbolt 3 port, two USB 3.1 Gen 2 Type-A ports, HDMI, and a combo audio jack.

The smaller Duo, for its part, comes with up to an eighth-generation Intel Core i7-8565U, and has the significantly weaker Nvidia Geforce MX250 card. It supports up to 16GB of RAM, and the ports are also a little less capable. Two USB 3.1 Gen 2 Ports - one Type-C and one Type-A - and one USB 3.1 Gen 1 aren't as impressive. On the flip side, it offers a microSD card slot, which might be an advantage.

Battery life should be significantly better on the smaller Duo, too, since its 70Wh battery has smaller screens with lower resolution to power. The Duo Pro only takes the battery up to 71Wh. As of yet, there's no word on pricing and availability for the devices.