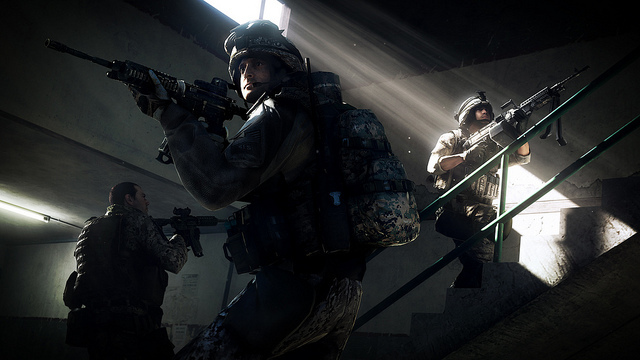 With Battlefield 3 now just over a month away from release, gamers who will play the upcoming first person shooter on the Playstation 3 console will get something a little bit extra. As announced on the official Playstation blog site, all of the game's upcoming DLC packs will be released first for PS3 owners of the game. This will begin with the pack Back to Karkand, which will feature revamped versions of four older Battlefield 2 maps along with new weapons, vehicles and more. Back to Karkand and all future DLC packs will be released for the PS3 one week before they become available for the Xbox 360 and PC versions of Battlefield 3.

This move by Sony and the game's publisher Electronic Arts is an obvious response to a similar deal for rival Activision's Call of Duty series. All of the DLC packs for its past few Call of Duty  first person shooter games were made available for the the Xbox 360 consoles a few weeks before they were released for the first person shooter's other platforms.

As previously announced this week, EA will launch the multiplayer open beta test for Battlefield 3 one week from today, on September 29. The beta test will allow PC, Xbox 360 and PS3 owners to play online on the Operation Metro map with the Rush gameplay mode. The beta test will also feature Battlelog, EA's free online service that will track player stats in Battlefield 3 along with communication features with fellow players. The full version of Battlefield 3 is due for release on October 25.