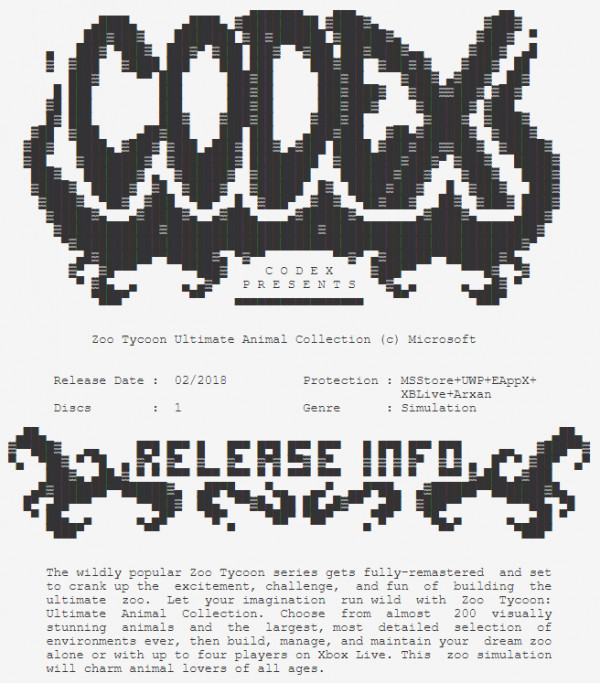 A video game piracy group by the name of CODEX claims it has successfully breached the 5 layers of protection that come with games published on the Microsoft Store on Windows 10.

The group lists these five layers of protection as follows: "MSStore, UWP, EAppX, XBLive, and Arxan." Like the more famous Denuvo - which has, of course, become a prime example of the persistence and ingenuity of pirates in getting around anti-piracy measures - Arxan serves as an anti-tamper system.

One of the crackers, Vorxi, makes no attempt to hide his disdain for Arxan, saying, "It’s the equivalent of Denuvo (without the DRM License part). It’s [sic] still bloats the executable with useless virtual machines that only slow down your game.”

The game they're using as the basis for their assertions is Zoo Tycoon Ultimate Animal Collection. While the title itself may not be the most exciting of games, what's far more important here is the group's claims that they have bypassed all five layers of DRM protection for the UWP platform, and that they could reproduce their success with other, more popular AAA titles.

The release notes by the hacking group state:

"This is the first scene release of a UWP (Universal Windows Platform) game. Therefore we would like to point out that it will of course only work on Windows 10. This particular game requires Windows 10 version 1607 or newer.

Of course, it remains to be seen if the cracking of Zoo Tycoon Ultimate Animal Collection will serve as a one-off event resulting from some particular flaw in its release or if it's only a test-case for similar exploits of big-name AAA titles to come. If the group's claims are to be believed and the latter is true, it may spell disaster for Microsoft's plans for attracting more developers to publish their apps on its Store.