According to data and analytics firm comScore, Microsoft's smartphone OS market share in the United States has remained stagnant, with the three month average market share ending in January 2013 coming in at 3.1%, down 0.1% from the same three month average period ending October 2012. Meanwhile, Apple's iOS saw the largest gains, rising 3.5% for the period to end with 37.8% of the market, at the expense of both Android and Blackberry share. 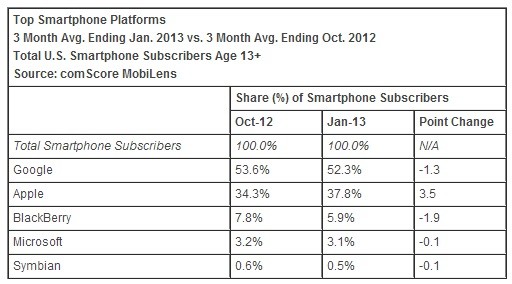 Google's platform saw a drop of 1.3%, down to 52.3%, although the operating system still remains by far the most popular with a commanding lead over its competitors. BlackBerry continued its downward slide by falling 1.9% to finish with 5.9% of the market, while Symbian also slid to end with 0.5% market share. Overall the market gained an additional 8.1 million smartphone users (up 7%), so even though some platforms saw a drop in market share, Google's, Apple's and Microsoft's OS actual user bases all grew for the period.

When it comes to smartphone OEMs it's not surprising to see Apple and Samsung both rising in terms of market share, with the companies ending with 37.8% and 21.4% of the US market respectively. HTC and Motorola lost market share, but both still managed more share than LG, which rose slightly while still occupying the fifth slot. 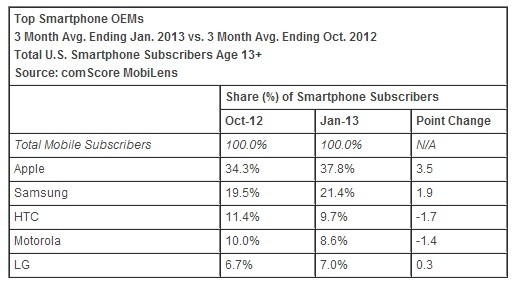 It's encouraging to see Microsoft's operating system market share - which is mostly made up of Windows Phone users, but also a small amount of residual Windows Mobile users - resist a large slide in a market that has been traditionally tough for major Windows Phone players, such as Nokia. With BlackBerry continuing to shed users, it's only a matter of time before Microsoft well and truly consolidates the third ecosystem spot.