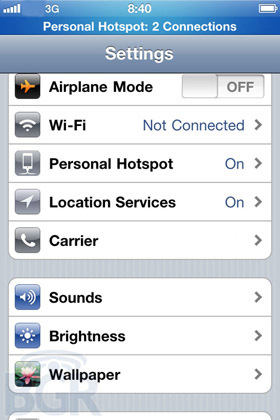 According to bgr.com, a source confirms that Apple plans on releasing iOS 4.3 which will allow most iPhones hotspot wireless connectivity and 3G sharing. The new feature will allow anyone to toggle it on and off, and also allow for a WiFi-encrypted password for secure connections to your devices.

Although no further details have been released, such as an exact release date, the source did say March 2011.

Jailbreak users have been using this feature for months now, using a program called "MyWi", which enables users to connect their WiFi-enabled device to the iPhone wirelessly, sharing your 3G connection. BGR learnt that iOS 4.3 will be version 8F514b and the baseband version will be 04.08.00.

This feature is nothing new to Android users, where their supported devices can already turn into a mobile hotspot, utilizing their 3G and 4G connection to share with WiFi-enabled devices.