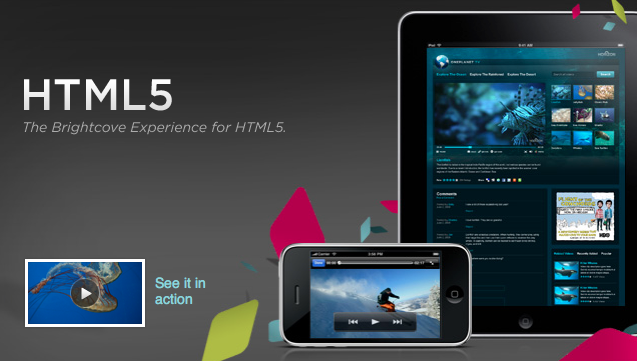 As Apple prepares their stores for the iPad launch at the end of this week, more and more content providers are taking action to adjust for the ever increasing amount of iPhone OS users that won't have Flash to view their content.

Brightcove announced today that they will be bringing HTML5 video through H.264 for their partners to seamlessly deliver video content to the iPhone, iPod Touch, and the iPad. Their largest partners, The New York Times and Time Magazine, are reported to already be on board to deliver video content to the aforementioned devices. Brightcove's solution will solve the "knowledge gaps, technical limitations, and additional development costs" that organizations will face when trying to deliver video and other rich media to iPhone OS users. Their current platform features automatic device detection, native HTML5 player templates, and optimized H.264 transcoding.

TED's curator, Chris Anderson, also announced yesterday that a non-Flash version of their site is now live for iPhone OS users. iPhone, iPod Touch, and supposedly iPad users should now be able to watch videos, leave comments, and rate videos in Safari without needing the native TED app in the App store.

CBS, one of the largest TV networks in the US, was also seen testing HTML5 video playback for iPhone OS devices last week.

Apple's CEO Steve Jobs has been reported to be very vocal against the thought of Flash on any iPhone OS device. Reports surfaced earlier this year that Jobs personally attributed the slow and buggy Flash plugin on OS X to "lazy" Adobe developers and proclaimed that HTML5 is the way forward. He also claimed that the iPad's touted 10 hour battery life would be dwindled to 1.5 hours if they allowed Flash on the device.

Adobe has stated that their upcoming Flash Player 10.1 will improve performance and efficiency greatly on mobile devices and that Mac OS X performance is also being worked on.