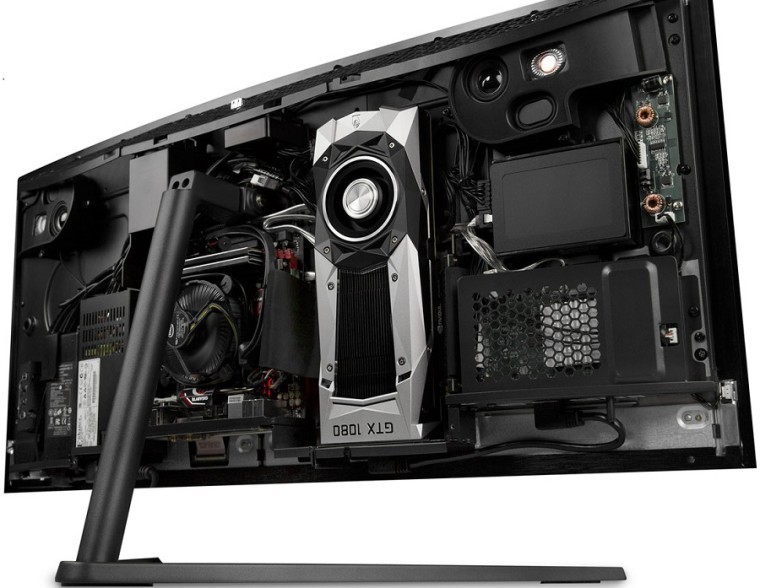 If you want a high end, custom built gaming PC from a company not called Alienware, you owe it to yourself to check out the offerings from Digital Storm. If you recall, we reviewed the Vanquish II back in 2014 (and even gave one away!) and came away extremely impressed with the performance.

But that was 2014, and times have changed. A mere four cores and 8G of RAM is practically nothing these days so, as we reported earlier today, Intel has helped us out by producing a CPU with a whopping 10 cores on it. Now we've also learned that Digital Storm has created a ridiculous gaming rig that revolves around this new Intel i7-6950x processor. Dubbed the "Aura," the top-of-the-line configuration has the aforementioned i7-6950x CPU, a staggering 32G of RAM, and the GeForce GTX 1080 8GB (NVIDIA Founders Edition) video card. The craziest part? All of this is built inside of a 34" curved monitor that supports a resolution of 3440 x 1440.

Now all of this hardware doesn't come cheap: The base price of the Extreme version comes in at $4998, and you can go up from there if you decide to upgrade the video card to the GTX TITAN X 12GB or if you want to increase the storage components. The good news is that if you really like this form factor, you can get a cheaper version with a paltry 4 cores and 16G of RAM for a mere $2000.

The Digital Storm Aura is expected to ship at the end of June.