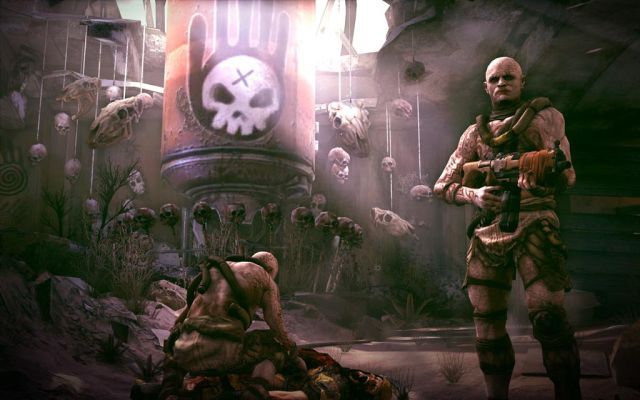 Nearly three years after id Software first announced plans to release Rage, the game is getting closer and closer to its release date. E3 2011 gave us an opportunity to actually play id Software's first original game since Quake way back in 1996. We got to play two of the (sort of) mini-games that are a part of this big post apocalyptic shooter that publisher Bethesda Softworks will release in September.

One is Bash TV, which is basically what if Survivor were all about killing mutants in order to stay alive. Your character has to go through five phases of Bash TV as he encounters waves and waves of mutants. Some of the phases have things like spikes sticking out of the floors and a mechanical monkey that rotates around the arena with razer blades. Finally there's the boss battle with a big mutant that can charge you for damage as well as fire a tentacle that can both damage you and blind you with green goop.

The other mini-game involved Rage's dirt vehicle as you compete in a three lap race. Your dune buggy can be outfitted with rocket launched to blast your fellow racers apart. You can also gain boosts packs to kick up your acceleration a notch. While the driving physics are a little more floaty than we would like we quickly got used to the mechanics of it.

Rage is looking like it will be id Software's deepest and most complex game it has ever made. We will soon see of all these elements come together as a whole to make a great game but for the moment it's looking like Rage will be a very entertaining shooter.