We've all seen the leaks appear in recent weeks, and if you haven't, check out this article featuring a video put together by an someone claiming to have a genuine iPhone 5 casing way back in June; or here for some other nuggets.

Today though, we have a hands on with what appears to be a prototype finalized design casing of the iPhone, in a mall, somewhere in Bangkok, Thailand. 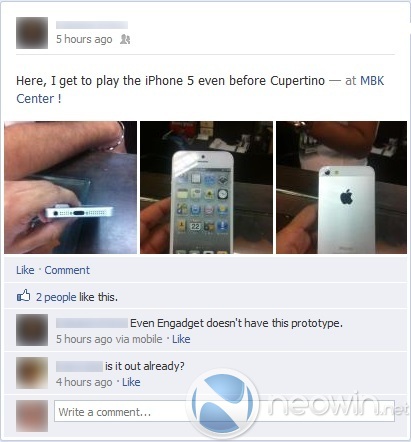 The pictures seem to confirm what we saw in the video, and after reaching out to the source (who is an ex staff member from a long time ago) he confirmed that the iPhone is not a working device, but a "non functional replica prototype" and in his own words, "pretty accurate too."

So we can fall back on what we already know, which is that the unibody case appears to be redesigned to feature an aluminum shell. The glass backing that appeared in the iPhone 4 and iPhone 4S is notably absent; instead, the entire exterior is a single piece. The casing appears to feature the rumored elongated design of the new iPhone, which is said to be around 4 inches in height. Additionally, a new docking port appears to be in place, and the headphone jack has been moved to the bottom of the device similar to Apple's iPod line.

This certainly must be a first, the general public getting a look at what's to come. One has to wonder if this sort of thing would have happened if Steve Jobs were stilll head-honcho at Apple.

Thanks to our awesome ex-staff member for the tip!

Check out the gallery below for larger pictures.