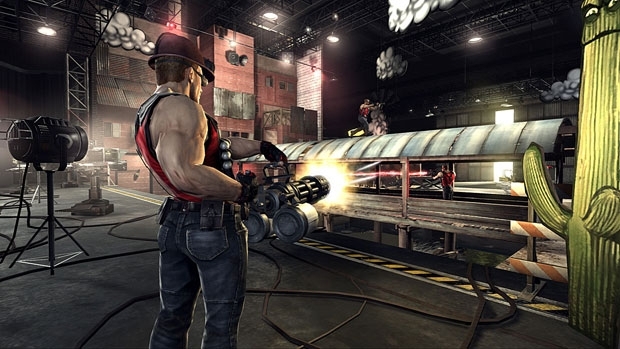 It's been about a month and a half since the long awaited first person shooter Duke Nukem Forever was released. While the game sold well in its first month, coming in at number two (behind LA Noire) on the NPD Group's June sales list, the reviews for the game that took 15 years to complete were mostly on the negative side. Yet that isn't stopping publisher 2K Games and developer Gearbox Software from planning to release a series of DLC packs for the game.

The official 2K Games blog site has the first details on the first DLC pack for Duke Nukem Forever. It's titled the Hail to the Icons Parody Pack and its scheduled to be released for the PC, Xbox 360 and PS3 platforms later this fall. People who are members of the Duke Nukem Forever First Access Club will be able to download the pack for free. There's no word on what the price will be for the pack for everyone else.

The pack will include four new multiplayer maps all of which are designed to be parodies of other games. One is Call of Duke which features players battling in a Call of Duty-style modern cityscape. It also adds a new weapon, the "N00b T00b". Another map is 2Forts1Bridge, a parody of Team Fortress with the new minigun weapon. Yet another is Inferno which looks like it will be set in the world of 16-bit graphics. Finally there's Sandpit which features players as mini-Dukes in a giant sandbox with extra Sticky Grenades.

In addition to the maps and weapons, three new gameplay modes will be added in the DLC pack; Freeze Tag, the free-for-all mode Hail to the King and Hot Potato where players compete to see "who can hold on to the babe the longest."

If you happen to live or will be in the San Francisco Bay area on Thursday, August 4 you can sign up to check out the Duke Nukem Forever Hail to the Icons Parody Pack at 2K Games's offices. The blog site has more info on how to sign up to attend the event.