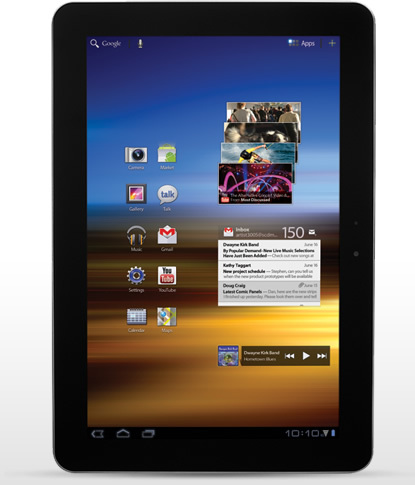 Samsung's original version of its Galaxy Tab was one of the first direct competitors to Apple's iPad in the tablet market. However the Android-based device only had a seven inch screen. Now Samsung is getting ready to release its larger 10.1 inch Galaxy Tab to better compete with the iPad. Venture Beat reports that New York City residents will be the first to get access to the Galaxy Tab 10.1 tablet on June 8.

Meanwhile Verizon Wireless, which is already selling the 7 inch version of the Galaxy Tab, has announced plans to sell the 10.1 version of the product. This version will come with support for Verizon's fast 4G/LTE wireless network. People will be able to pre-order the LTE version from Verizon on June 8 for $530 for the 16 GB version and $630 for the 32 GB version with a new two year contract. Verizon has not yet announced when the LTE version of the Galaxy Tab 10.1 will actually go on sale, saying only that it will be later this summer.