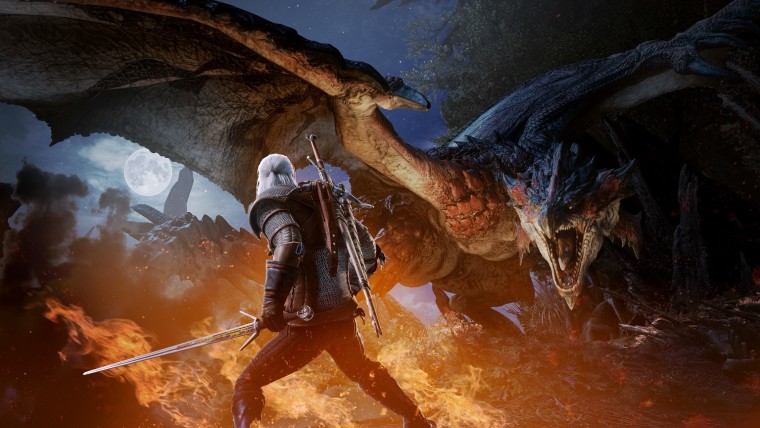 Back in December, Capcom announced that it would be collaborating with CD Projekt RED to bring Geralt of Rivia, the protagonist of The Witcher series, to Monster Hunter: World. At that point, it was only known that this content would arrive for consoles in "early 2019", though a PC release time frame wasn't shared. That has changed with today's announcement.

As part of the game's sixth title update on PC, coming May 9 at 12AM UTC, Geralt is finally making his appearance on Steam.

There are new lines, recorded by the original voice over artist for Geralt, Doug Cockle, in English, French, Italian, German, Spanish, Japanese, and Monster Hunter Language. Furthermore, there's addition of the Leshen, a monster from Witcher lore. This is part of a special assignment dubbed "Trouble in the Ancient Forest", during which you get to fight this aforementioned monster. The rewards are:

This is a single player only quest and will always be available, with its ending being dependent on the player's progression through side objectives.

In contrast to the one above, this title update also adds a special event called "Woodland Spirit" that will only be available between Friday, May 17 12AM and Thursday, May 30 11:59PM UTC. Rewards for completing this event will be materials to complete the "Ciri α" full armor set, and the "Zireael" dual blades. In addition, you'll get delivery requests which allow you to obtain materials for the Geralt Layered Armor, and Ciri Layered Armor. Keep in mind that the difficulty of this event is comparable to the "Death March!" setting in The Witcher 3: Wild Hunt (in other words, the game's hardest option).

Any bugs that players have experienced with the Woodland Spirit event on other platforms have been fixed for the Steam release. Additionally, the upcoming title update contains other, as of yet unspecified bug fixes.