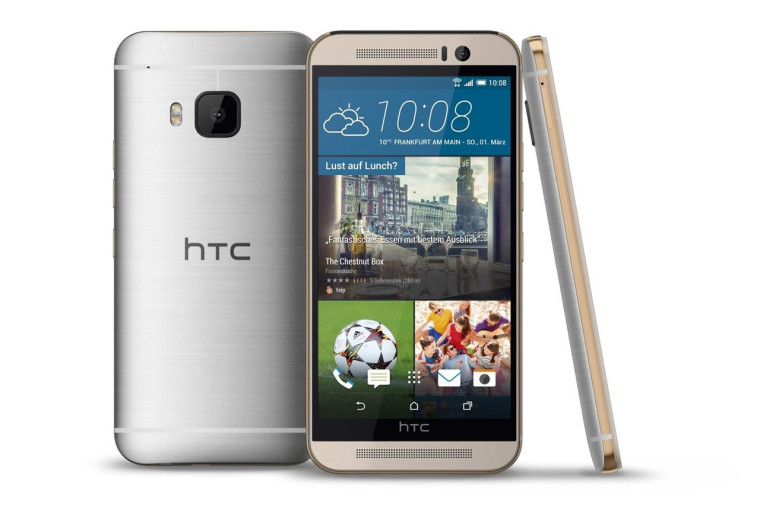 The German retailer Cyberport.de has listed the upcoming HTC One M9 on their website and although the phone can't be ordered yet, it also misses the "M9" in the product listing. First discovered by Mobilegeeks.de, Pocketlint has managed to grab all the images and even do a side profile comparison between a HTC One M8 and M9.

The renders are definitely not of the M8, though, as Pocketlint points out that there are some differences between the renders and the M8, as shown below.

The top render is the supposed M9, and the bottom one is the existing M8. There are slight differences to be seen, one being an obvious camera hump which seems to validate rumors that HTC is taking the camera capabilities of the M9 seriously - a larger hump can only mean that a more powerful camera has to be housed, potentially upwards of 20 MP.

Then there is the gold-on-silver option, which means that there could be a separate backplate, or a new two tone option taken from the M8 unibody design.

@Upleaks also chimed in on the new images that surfaced, stating categorically the color options that will be made available.

Which further seems to validate the renders as possibly the real deal.

On Friday, HTC announced they will be revealing the new HTC One on the 1st of March, but also hinted that "Something HUGE is coming," possibly referring to a phablet or tablet to be announced as well. In any case we will find out during the Barcelona Mobile Worldwide Conference which takes place between March 2nd and 5th, but not before several manufacturers have made their own unveilings starting on Feb 28th, and we will be there to bring you the news.

In late January, renders surfaced on the M9 which also included all known specs. Those renders however were quite small and look quite a bit different to these new ones, that supposedly, are in the hands of at least one retailer already.

For now though, check out the gallery for all the renders and color options below.