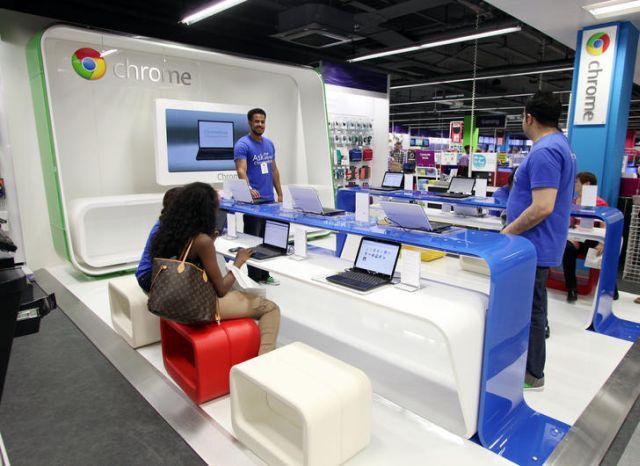 Google wants more people to try out its Chromebooks, the notebooks that were released earlier this year by Samsung and Acer that uses Google's Chrome operating system. To that end Google has decided to launch a "store within a store", the Chrome Zone, inside the Currys and PC World superstore in London. TechRadar.com reports that the store, as you can see in the picture above, has a Google-like look and feel with the splashes of color all around the retail store front.

At the moment, the only product the Chrome Zone actually has for sale is the Samsung Chromebook which first went on sale in the UK in June. The Acer model has yet to make an appearance in that country. Mark Slater, who is the category director at the retail store's parent company Dixons Retail, claims that customer response to the Chromebook itself "has been excellent". He adds, "It's the most revolutionary laptop on the market and as the leading electrical retailer in the UK we are thrilled that our flagship store has UK exclusivity to showcase this new technology to our customers. We have dedicated staff who have been specifically trained in using the Chromebook to demonstrate all its unique benefits and features to customers."

Google states in its official Chrome blog site that it plans to open up more Chrome Zones in the UK over the next few months. There's no word yet on if this retail store concept will make its way over to the US. So far only Samsung and Acer had released notebooks with the Chome OS inside; Google has been silent about its future plans for Chromebooks.