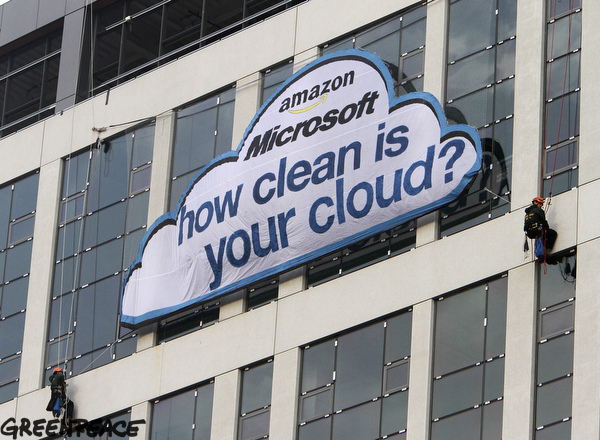 Earlier this week, the environmental group Greenpeace issued a report about cloud computing and energy consumption. In the report, Greenpeace claimed that many tech companies, including Microsoft and Amazon, don't do enough to power their cloud services with renewable energy sources.

Today, two Greenpeace activists took a more public approach to their viewpoints. The official Greenpeace blog reports that the two members rappelled down the side of Amazon's office building in downtown Seattle, which is still under construction. Then the duo unfurled a 800 square foot banner that could be seen by people inside Microsoft's own Seattle office building. The banner had Microsoft and Amazon's logos with the question, "How Clean is Your Cloud?”

Amazon and Microsoft have some of the brightest, most innovative engineers in the business. They have the potential to power their cloud with green, renewable energy, but are falling behind competitors Google, Facebook and Yahoo in the race to build a truly clean cloud.

The Seattle Post-Intelligencer reports that the two Greenpeace activists were later asked to leave by police. The duo went back up on the roof and left the building. No arrests were reported.