Employees at HP will be able to stand a chance at getting one of the final TouchPads made by the company. The webOS tablet, which barely survived a month before being cut to $99 and sold off as part of a 'fire sale', then became a highly-desirable piece of technology. Since the fire sale, enterprising sellers online have attempted to turn a profit by selling the tablets for inflated sums of money. But what about the HP employees who may not have been able to buy a tablet produced by their own company? News is good for them, it would appear, as the company is going to offer some of its final TouchPads to employees on a 'first come, first serve' basis.

According to an internal email, which was acquired by TechCrunch, Senior Vice President Stephen Dewitt acknowledged the company was intending to clear inventories. The possibility of one more batch of TouchPads is still alive, but the email does not suggest anything about it. The offer, extended to employees from September 28th, means that you could see a few more tablets available on eBay if you missed the initial rush. It may also be worth keeping an eye on Best Buy and other larger retailers, in case they do get one more batch of tablets to sell. 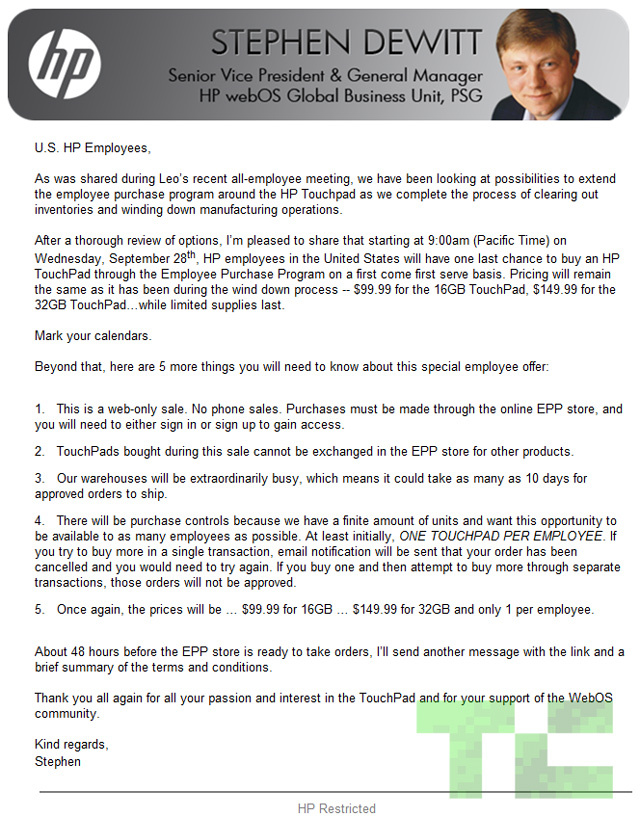