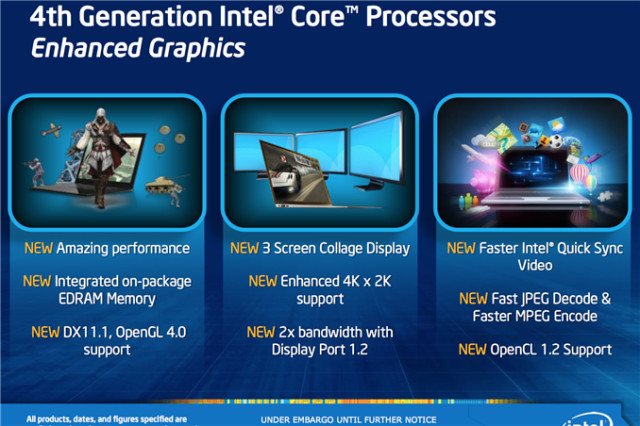 Intel today have detailed their new graphics options for their upcoming 4th-generation Core processors, codenamed 'Haswell', and while the low-power chip offerings from the Santa Clara company will use relatively mild GPU solutions, the top-end chips will see significant boosts. With Haswell, Intel have gone from two graphics tiers to three, continuing the HD Graphics brand in one and introducing two new brands: Iris and Iris Pro.

15W Ultrabook U-series processors will use HD Graphics 5000 chips, which are a modest (50%) upgrade over the current line of HD Graphics 4000 GPUs found in lower-power Ivy Bridge processors. The real fun begins in the 28W TDP range, with those U-series chips coming with Intel's new Iris graphics processor. Intel claims Iris delivers double the performance of their previous HD Graphics 4000 chip in 3DMark11, but it gets even better with Iris Pro. 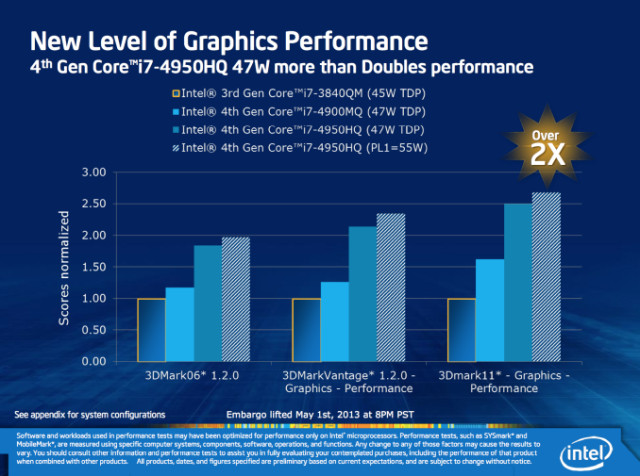 Iris Pro is the highest-end of the chips that will be exclusive to quad-core Haswell CPUs, and they'll be included in most chips with a TDP of 47W or greater. Intel has measured a 2.5x performance improvement with Iris Pro over HD Graphics 4000 with H-series mobile chips, and up to 3x with R-series desktop CPUs; as well as H- and R-series, Iris Pro will also be seen in some M- and K-series chips.

With Haswell, Intel is definitely getting serious about graphics performance of their integrated chips, and they expect Iris Pro will be able to compete with NVIDIA's discrete GeForce GT 650M. Of course it won't be quite up to scratch for those looking at building a gaming PC - you should definitely stick to a dedicated card in these circumstances - but it will deliver much needed improvements to laptop performance.