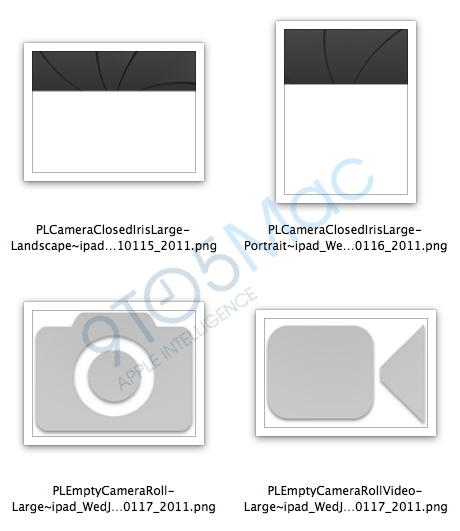 Just two days after its release, the first beta of iOS 4.3 is apparently proving a goldmine for tech bloggers, with the latest discoveries hinting at a camera-enabled next-generation iPad and a new location-based feature.

While digging through the iOS 4.3 SDK, 9to5Mac tipster Sonny D has apparently discovered graphics that strongly suggest the next iPad will have a camera capable of both still and video captures.

That discovery came less than 24 hours after 9to5Mac staff did some digging of their own and also found graphical resources indicating a camera will be among the features added to the ''iPad 2'', which many are expecting Apple to announce within the next month. Interestingly, the resolution of the graphics is 1024x768 - the same resolution as the current generation iPad screen. That would seem to contradict claims from multiple sources - most recently Digg founder Kevin Rose - suggesting the next iPad will have a higher quality (though not necessarily Retina) display. All may not be lost, however, with 9to5Mac's Mark Gurman making the point that the iOS simulator may be limited to 1024x768.

Meantime, MacRumors reports Apple could be bringing a "Find My Friends" feature to iDevices in their next OS update. Settings discovered within the iOS code give little detail, but the name of the feature suggests something along the lines of Facebook's Places feature, or Google's Latitude service. Any new location-based feature would more than likely form part of the MobileMe suite, since it already includes the location-based ''Find My iPhone'' service.

Rounding off the barrage of iOS 4.3 news is confirmation of a Boy Genius Report report, again by 9to5Mac, that Apple will bring its Photo Booth application to mobile devices in the near future, with files in the latest iOS SDK containing clear references to the app. Check out all the visual evidence in the gallery below.