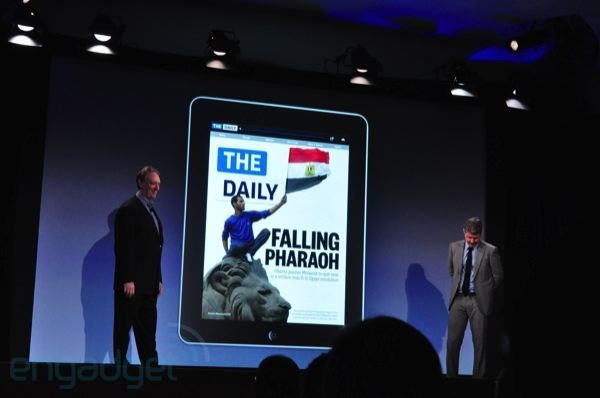 It was supposed to be an example of how the "new media" of online reporting would combine with the growing number of touch screen tablets. On February 1st, 2011, News Corporation launched The Daily, an online news magazine that was designed to be viewed and read on Apple's iPad. Indeed, Apple itself helped News Corp. with the creation of The Daily.

People were supposed to sign up to purchase The Daily for 99 cents an issue or $39.99 for a year's subscription. News Corp clearly hoped that The Daily would be the iPad's version of Time magazine back in its heyday. Unfortunately, there were simply not enough folks interested in what News Corp. was selling and there have been rumors that it would shut down for months.

Today, that word finally came as part of a News Corp. press release that announced the overall separation of its publishing interests from the rest of News Corporation. As part of that reorganization, The Daily will shut down on Saturday, December 15th as a "standalone publication" although it added that The Daily brand name "will live on in other channels."

Jesse Angelo, the editor in chief of The Daily, will now become publisher of The New York Post and some of The Daily's staff and technology will follow him to the Post. In his own statement, News Corp. chairman Rupert Murdoch said:

From its launch, The Daily was a bold experiment in digital publishing and an amazing vehicle for innovation. Unfortunately, our experience was that we could not find a large enough audience quickly enough to convince us the business model was sustainable in the long-term. Therefore we will take the very best of what we have learned at The Daily and apply it to all our properties.

Murdock bragged back in February 2011 that The Daily cost $30 million to develop and that it would take about $2 million a month to keep generating new content. However, it's estimated that just 120,000 people had signed up to subscribe to the magazine at its height.