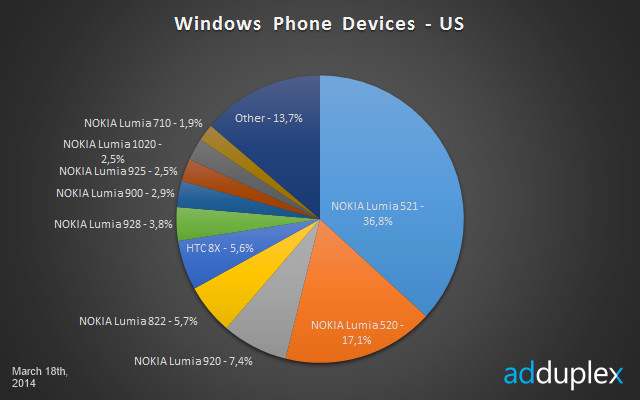 T-Mobile launched the Nokia Lumia 521, a variant of the Lumia 520, in May 2013 in the U.S and AT&T finally launched the 520 in the country later in 2013. Today, the newest data from mobile ad firm AdDuplex shows that the combined 520/521 numbers now claim over half of the market share for Microsoft's Windows Phone OS.

The latest report, which is based on based on data collected March 18th from 3,568 Windows Phone apps running AdDuplex's SDK, shows the Lumia 521 in first with 36.8 percent, followed by the 520 with 17.1 percent. Combined, the two devices now claim 53.9 percent of Windows Phone use in the U.S. All of the other phones with Microsoft's operating system are far behind; the high end Lumia 1020, which Microsoft and Nokia have tried to promote heavily, is in ninth place with 2.5 percent.

Verizon Wireless launched the Lumia Icon a few weeks ago in the U.S. but it is priced as a high end phone; it remains to be seen if it will have better luck in the marketplace compared to the 1020 and 1520 devices.

Worldwide, the Lumia 520 still dominates the Windows Phone market with 34.6 percent. All of the other smartphones are in single digits, percentage wise, but the Nokia Lumia 620 managed to take over second place on the chart at 6.7 percent, moving the Lumia 920 down to third at 6.5 percent.