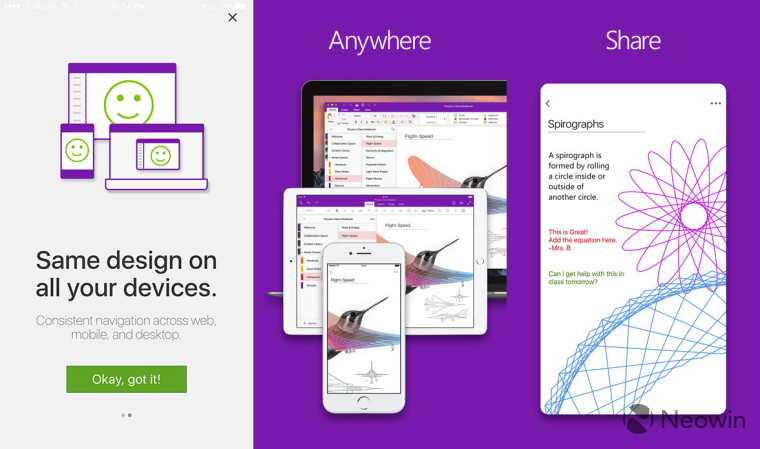 Earlier this week, Microsoft updated its OneNote app for iOS with a significant overhaul of its user interface. Today, the company formally announced details of the new design, and revealed that it will also be rolling out to OneNote across Windows 10, Mac, Android, and the web, "over the coming weeks".

The OneNote team explained that it focused on making the app "more usable for those with disabilities - such as vision and mobility impairments." It also conducted hundreds of interviews, as well as reviewing telemetry from real-world users "to understand how to improve keyboard shortcuts and the screen reader experience."

The app now includes a revised navigation layout, which Microsoft says will improve usability, "especially for larger notebooks with more sections". It explained:

Now, the navigation controls are all in one area on the left-hand side of the app. This allows users to easily switch between their notes and dramatically improves usability with assistive technologies. With the new consolidated and simplified design, screen readers can easily navigate through the app to help those with disabilities. In addition, content is front and center—helping students to focus and avoid distractions.

Microsoft added that the new design will establish a common OneNote experience for all users, regardless of which devices they use. "Having a cohesive user experience across all screens makes it simple for users to jump from one device to the next", the company said.

The ability to easily transition between devices was a key theme at Microsoft's Build 2017 developer conference last week, where it announced numerous tools to improve workflow across Windows 10, iOS and Android devices.

Microsoft's William Devereux, Product Manager Lead for OneNote apps, said that Windows Insiders in the Fast ring will get the new look app "very soon". Further details on the OneNote redesign can be found here.