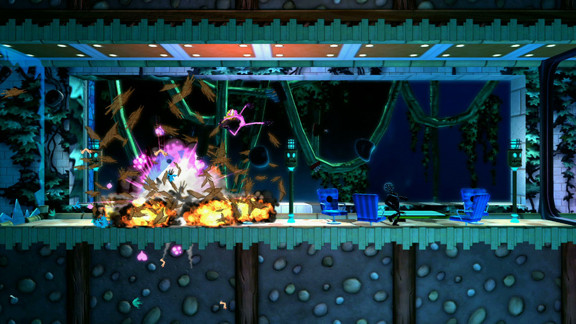 In July of 2011, Austin, Texas-based developer Twisted Pixel Games released Ms. Splosion Man for Microsoft's Xbox 360 console via Xbox Live Arcade. The sequel to 2009's 'Splosion Man, the side scrolling action game was critically acclaimed for both its gameplay and its humor and was also a sales hit.

Today, Microsoft and Twisted Pixel finally released a PC version of Ms. Splosion Man and it can now be purchased and downloaded on the Steam service, along with Games for Windows Live, for $9.99. The PC port contains the original 50 level single player campaign that the Xbox Live Arcade had, plus a separate 50 level co-op based multiplayer campaign for online and offline play with up to four people. It also has a new ending for PC layers to enjoy.

Twisted Pixel also released a version of the game for Windows Phone 7-based devices for $2.99 today via the Windows Phone Stoe. Last week, a version of Ms. Splosion Man was made available for iOS devices, also priced at $2.99, on iTunes. Twisted Pixel's next game for its owners at Microsoft is LocoCycle, a motorcycle-based action game that's due for release sometime later in 2013.