Microsoft has started selling its latest Surface tablets with its new OS onboard, and has extended discounts on some models of its flagship Surface Pro 3 by $150. The price cut is just the latest in a long line of regular discounts for the device.

Indeed, the current price cut was originally scheduled to end on August 1, but the company quietly extended that for a few more days. Today, August 4, is the last day on which you'll be able to get three Surface Pro 3 models with $150 off:

Microsoft has also begun selling both the Surface Pro 3 and the smaller Surface 3 with Windows 10 onboard, following the launch of the new operating system last week. Microsoft had indicated last month that it might be a bit longer before Surfaces arrived in stores with Windows 10 pre-installed, but promised that it would happen 'soon'. 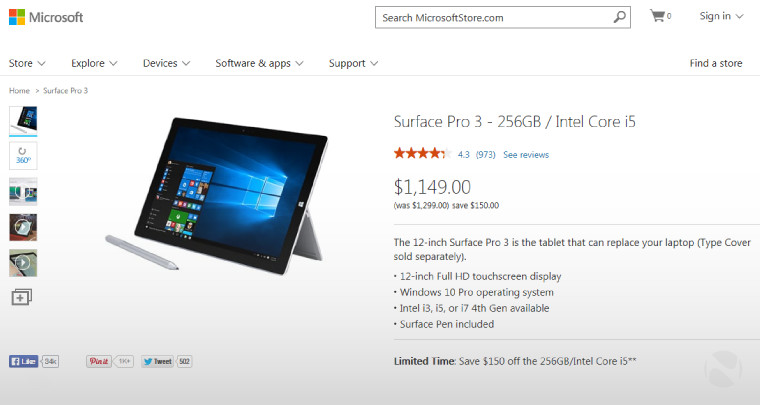 Both of the company's latest Surface tablets are now listed on its site with Windows 10. For those who have already purchased a Surface, the operating system's rollout continues to progress in 'waves', although it may take a few more weeks for Microsoft to deliver upgrade notifications to all eligible devices.