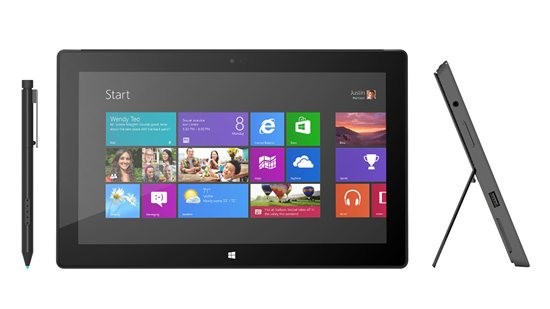 Microsoft has just announced that the Surface Pro tablet, which will run on Windows 8 Pro, will be priced starting at $899 when it comes out in January 2013. That will be for the 64 GB version, while the 128 GB Surface Pro unit will be priced at $999. The prices do not include the Touch or Type covers.

In his post on the official Microsoft blog, the general manager of the Surface division, Panos Panay, said that both versions of the Surface Pro would come with a "Surface pen with Palm Block technology". He added:

This is an amazing feature for all you note-takers or document editors out there, especially since it has expanded capacitive and digitizing technology we’re calling Palm Block that will prevent your handwriting from getting interrupted if you accidentally place your palm on the screen as you write. This feature is pretty cool, and allows for a great inking experience alongside a great touch experience when needed.

Panay added that the Surface Pro will still weigh less than two pounds and will be 14 millimeters thick. The blog post did not go into details on which date in January pre-orders will begin.