The "Panama Papers" is a collection of 11.5 million documents detailing information related to over 200,000 offshore accounts. Ever since the Panama Papers were anonymously leaked back in 2015, there has been a major shift in the political situation in many countries. One such country is Pakistan, where the names of numerous members of the Prime Minister Nawaz Sharif's family were spotted in the papers.

As such, for the past year or so, legal and financial authorities have been investigating the Prime Minister and his family over charges of corruption after pressure from opposing parties in Pakistan as well as public outcry. With the investigation now entering crucial stages, it appears that the availability and use of Microsoft's Calibri font have been used as evidence in the case.

While the possession of offshore accounts isn't illegal, they are often utilized for fraud and tax evasion. Although the name of Nawaz Sharif - who is also the leader of the Pakistan Muslim League (N) political party - didn't appear in the Panama documents, the names of his children were spotted. As such, a Joint Investigation Team (JIT) was formed to follow the money trail and to see if the "significant gaps" in it could be legally filled. In her family's defense, Sharif's daughter, Maryam Nawaz submitted photocopies of several documents in order to deny any wrongdoing, but it appears that the use of Microsoft's Calibri font may be her undoing.

The documents are dated February 6, 2006, but it is important to note that the Calibri font wasn't commercially available until much later. Despite being created in 2004, the font did not reach the general public until January 30, 2007. This discrepancy not only cast questions of doubt against the legality of the papers and possibilities of it being doctored but also weakens Sharif's case.

A photo of the JIT's statement can be seen below: 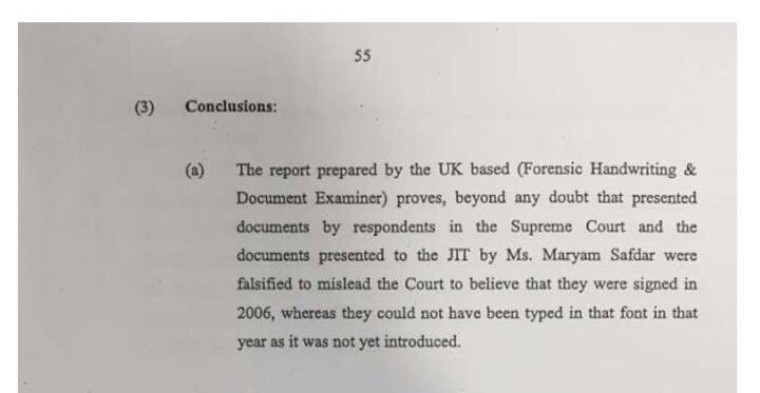 While the JIT's report has become the source for a lot of excitement over in Pakistan, Maryam Nawaz has rejected the authority's findings, saying that:

JIT report REJECTED. Every contradiction will not only be contested but decimated in SC. NOT a penny of public exchequer involved: PMLN

For now, it remains to be seen to be seen whether the availability of Microsoft's Calibri font will be playing a crucial role in potentially deposing the Prime Minister of Pakistan. Back in 1997, when Sharif was being questioned by the Supreme Court of Pakistan in another legal case, his supporters and cabinet ministers stormed the building, bringing a halt to proceedings.