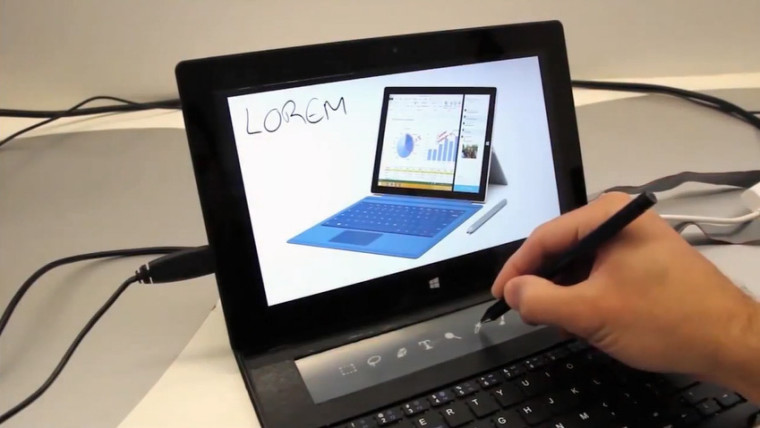 The keyboard cover has been a defining accessory of Microsoft’s Surface tablet line since the release of the original Surface. Although we have seen only a handful of variations of covers released to retail, it looks like Microsoft has a fairly interesting Surface 'DisplayCover' that is currently in prototype.

Microsoft has released a video of a prototype tablet keyboard they’re calling 'DisplayCover'. Although it is in prototype form, it looks very promising. Developed by Microsoft's Applied Science Group, the DisplayCover combines the Surface 'Type Cover' with a thin-film touchscreen e-ink display.

The e-ink display sits above the keyboard at a resolution of 1280 x 305 pixels, essentially extending the screen real estate by 8% (the prototype model is fitted to a Surface Pro 2 with a 10.6-inch screen).The team chose the e-ink display so that it would not particularly impact the tablet’s battery life. The display supports dynamic UI manipulation, meaning it can be used for multi-touch gesture interaction, stylus annotation and basic trackpad gestures. The display can also be used as a mini start menu, functioning also as a kind of taskbar and app switcher.

An accessory like this could be very useful, particularly in apps like Adobe Photoshop / Illustrator where constant switching of tools is required for maximum productivity. AutoCAD, video editing and music creation programs could also benefit from an adaptive tool pallete and the increased screen real estate that would come with it

Although this device is purely a prototype, it brings to question what new types of covers could be introduced with Microsoft's upcoming Surface Pro 4.