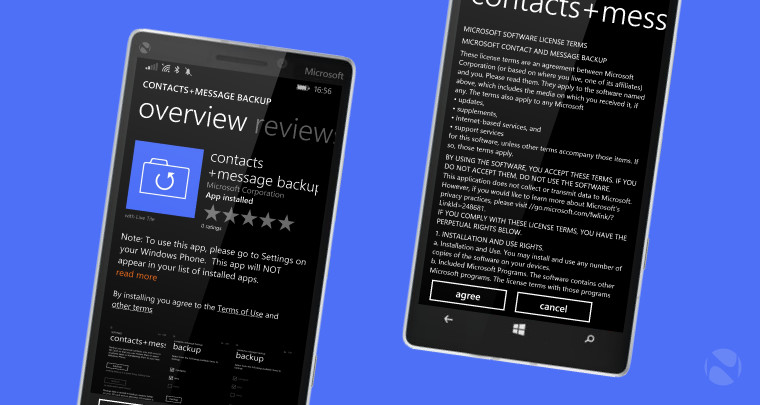 Microsoft has released a new backup application that will allow Windows Phone 8.1 users to completely backup their contacts and messages to an external microSD card.

Unlike traditional apps, once the "Contacts + Message Backup" app is installed, it will be located in the settings section. Although backing up contacts has been a fairly common feature for most devices, Windows Phone has relied on cloud backups since its debut. However, with the new application, you will now be able to backup contacts to a microSD card in the traditional VCF format. The same will apply when backing up SMS or MMS messages. The backup will also be exported to the microSD card but as an XML file. Unfortunately, those using a device without a microSD slot will not be able to take advantage of this application. They will be able to install the app but since it won't be visible in the app list, they won't be able to delete it.

Naturally, these backups can be used to transfer the relevant data to another Windows Phone or used in the event your primary device decides to have a fit. Although this is an official release, there is a current known issue for the app that pertains to dual SIM devices. For dual SIM handsets, when restoring data, the application will restore all messages to the first SIM and will not divide the messages properly between SIMs.

The "Contacts + Message Backup" app is now available for those running Windows Phone 8.1 and the download size is just under 1 MB.