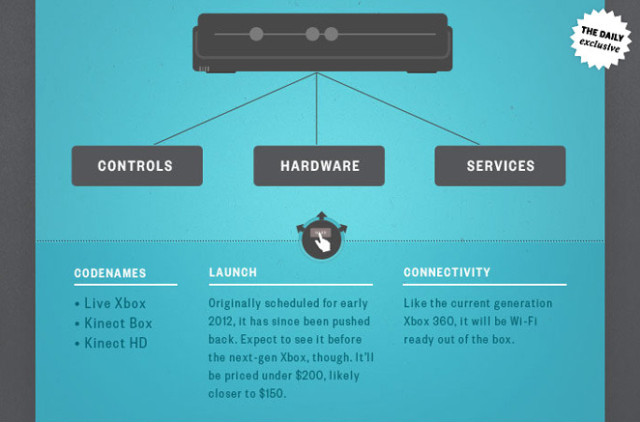 Earlier this year, The Daily reported Microsoft was working on an entertainment set-top box featuring Kinect.

A new report has been released stating Microsoft is working on a set-top box version of its popular Xbox gaming console, corroborating previous reports that were similar in nature.

According to a report from Tom Warren of The Verge, the Xbox set-top box, which he refers to as "Xbox TV," will be able to play casual games and stream video and audio. The set-top box will run "the core components of Windows 8," Warren writes, and will feature a low-power chipset that would allow the device to essentially always be on and boot up quickly to "provide near-instant access to TV and entertainment services."

In addition to the set-top box, Warren states Microsoft is working on making its next-generation Xbox architecture scalable so it can work on a variety of devices, such as the recently rumored Xbox Surface tablet. Another aspect of that scalability Microsoft is working on, Warren says, is getting the full range of Xbox Live services available on a phone.

Microsoft is expected to announce the next version of Xbox hardware – including Xbox TV – sometime next year, likely before or during E3 in June. Warren states the consoles would be released before the holiday shopping season that year.

Warren's report is nearly identical to one released a little more than a year ago by Microsoft insider MS nerd. In that report, MS nerd stated Microsoft was working on a cheaper Xbox console that would run on an ARM platform. Unlike Warren's report, however, MS nerd said the new console, which he claimed was codenamed "Loop," would run a modified version of the Windows 9 core.

A later report by The Daily substantiated those rumors. In January, that outlet said Microsoft was working on a set-top box that would include Kinect and support streaming-based entertainment apps such as Netflix and ESPN.

In a statement to The Verge, Microsoft said, "We are always thinking about what is next for our platform and how to continue to defy the lifecycle convention."

Source: The Verge | Image via The Daily