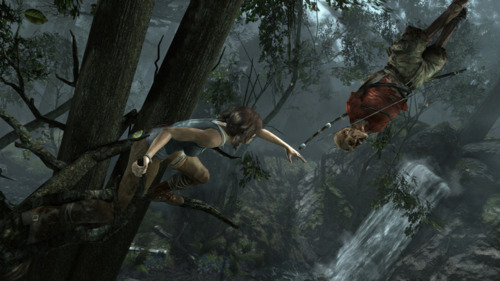 Developer Crystal Dynamics showed off a new build of their upcoming reboot of the Tomb Raider franchise during E3 2012 this past week. The game, which is now scheduled to be released in the first quarter of 2013, features a 21 year old version of the action-adventure series' lead character Lara Croft on her first big adventure as her ship crashes on an island.

However, in an article posted at Kotaku on Monday, based on an E3 2012 interview last week, one of the game's development team members said that Lara Croft would be forced to fend off island scavengers. It also claims that Tomb Raider's executive producer Ron Rosenberg said during that interview that the scavengers would also attempt to rape Lara Croft, although he is not directly quoted on that statement. He is quoted as saying, "She is literally turned into a cornered animal. It's a huge step in her evolution: she's forced to either fight back or die."

Gallagher says in his statement:

In this particular selection, while there is a threatening undertone in the sequence and surrounding drama, it never goes any further than the scenes that we have already shown publicly. Sexual assault of any kind is categorically not a theme that we cover in this game.

Meanwhile, Kotaku is trying to defend itself. It has now posted the full transcript of that E3 2012 interview, where it quotes Rosenberg as saying, "They try to rape her ..."