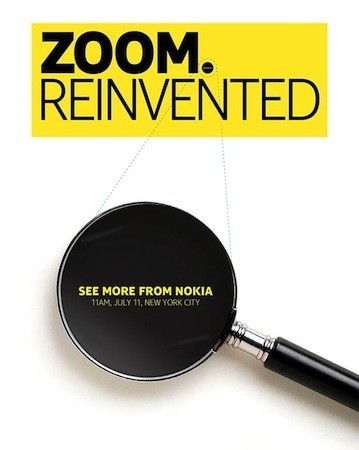 Nokia may finally be close to revealing the long-rumored Windows Phone 8 handset with a 41-megapixel PureView camera. Today Nokia sent out invites to a media event in New York City on July 11th, that certainly hinted at the possibility.

The invite itself is, as usual, low on details, with only the tag line "Zoom reinvented" giving anything away. It could well refer to the phone that has been the subject of a number of image and video leaks, and which has come to be known by its development codename 'EOS'.

Nokia is expected to bring a version of its 41-megapixel camera - first seen in the 808 Pureview from 2012 - to its new flagship Windows Phone. Both Microsoft and Nokia have been emphasizing the photo features of the previously launched Lumia products in recent commercials and marketing campaigns, and this press invite would seem to be a continuation of those efforts.

Recent rumors claim the EOS is currently being tested on AT&T's network under another code-name, Elvis. This could hint at the EOS being an AT&T exclusive when it is launched. So far, there's been no word on what price Nokia might charge for the EOS, but expect it to slot in above the existing Lumia 920 family in Nokia's range.