Nokia has so far only announced pricing and availability in the US, where the handset will be exclusively offered on AT&T, who'll be expecting you to hand over $299.99 upfront, as well as committing to a two-year contract. That will make the device one of the most expensive in AT&T's range, going head-to-head with the identically priced iPhone 5 32GB. 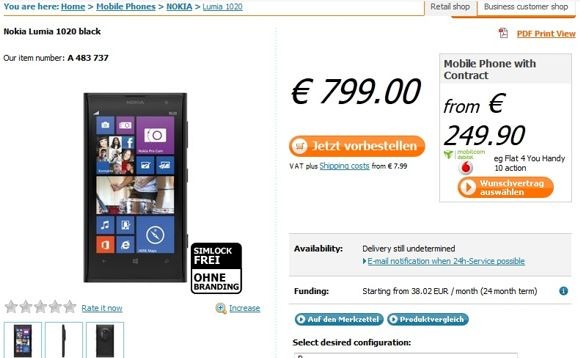 The first indications of pricing beyond the US were revealed today by Nokiapoweruser, who spotted pre-order pages from two separate German retailers that had each priced the Lumia 1020 at €799 EUR (straight-up currency conversions: $1,042 USD / £690 GBP - actual local pricing may vary by market).

Nullprozentshop has since pulled the page from their site, while Notebooksbilliger has removed its pricing (seen in the image above), but still has a preview page for the upcoming handset. Notebooksbilliger also detailed pricing for the handset on contract, starting at €249.90 ($326 / £216) upfront with Vodafone, T-Mobile and O2.

Telefónica - O2's parent company operating in parts of Europe and Latin America - will exclusively offer a 64GB version of the Lumia 1020 in certain markets, although the company has not yet revealed how much it will cost, or when it will launch. We've been in touch with numerous UK network operators and retailers regarding their plans to launch the 1020, with most confirming availability in September.

Are you planning to buy a Nokia Lumia 1020? Don't forget to vote in our poll!