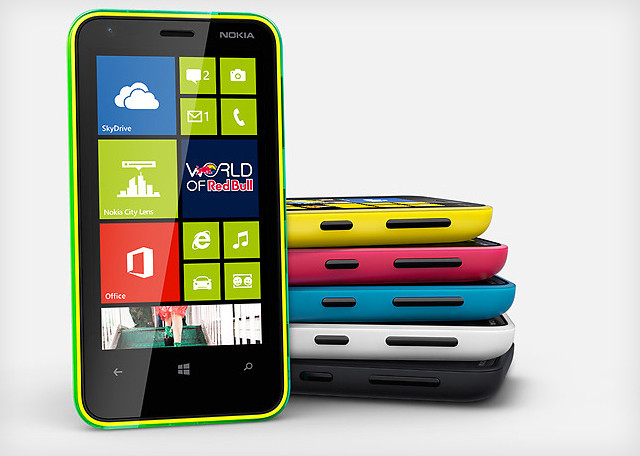 The Executive VP of Design, Marko Ahtisaari at Nokia, has unveiled its latest Windows Phone 8 device: the Nokia Lumia 620 at the LeWeb conference which is taking place in Paris this week.

This wallet friendly device costs just $249 or 190 euros (before taxes) and comes in no less than seven swappable shells in gloss or matte depending on the color, some of which are new; according to TechCrunch: "overlaying one translucent color layer over an opaque layer to produce new shades such as lime green and orange."

The screen is also a bit smaller than other WP8 offerings by Nokia at 3.8-inches, and features Nokia’s ClearBlack display WVGA screen running at 800 x 480 resolution and a Qualcomm S4 1GHz dual-core GPU.

There's also a 5-megapixel rear camera and a front facing VGA one, 8GB of internal storage but that's also complimented with a microSD card slot.

NFC for linking up with accessories such as speakers is also included, an “especially loud speaker” on the back of the phone, and Nokia-specific Windows Phone 8 apps/features — such as SmartShoot, Cinemagraph and City Lens.

The Lumia 620 adds a relatively smaller and cheaper solution to Windows Phone 8 offerings; “We knew there was space in the portfolio for something more compact,” said Ahtisaari, adding:

“Something that fit beautifully in the palm of the hand. But something that still had the camera, a solid camera, and the signature apps that Nokia is noted for. And as well we wanted something that would take our pure color story and just give it a burst of playfulness — mix it up a little bit.”

This device will begin shipping in the Asia-Pacific and Middle East markets from January, with Europe and other markets to follow.

Update: The unveiling can be viewed in the video below:

Jump to 14:30 for the Lumia 620 announcement, or click here to open the video at that point in a new window.

Sources: TechCrunch & The Verge | Image via The Verge