When OnePlus first announced that it was planning to launch the 'perfect smartphone' for under $500, we were intrigued. By the time the company had teased and hyped up its offering further, eventually revealing that the OnePlus One would cost just $299, we were very excited, as were many others interested in buying the device. 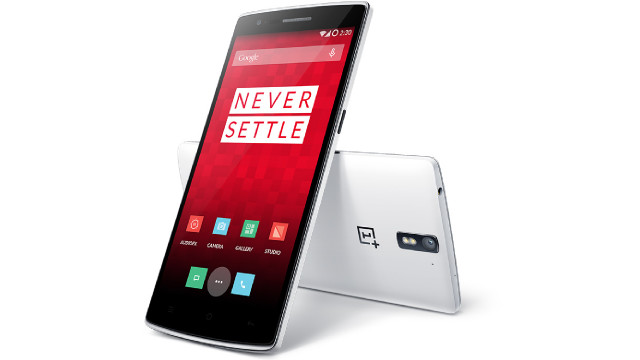 But since then, OnePlus has made one questionable decision and error after another, squandering much of the good will that it managed to build up. First off, the company didn't just let people buy the device - instead, those wanting to purchase it had to obtain an 'invite' to do so, being required to take part in social media activities and 'contests' in order to get one.

When OnePlus finally started shipping devices, it emerged that an entire batch of the handsets sent to Europe had to be returned, after the company changed the design of the regulatory 'CE' mark - a symbol that, it surely goes without saying, must never be altered by manufacturers. Curiously, it seems that OnePlus shipped those devices with the incorrect regulatory mark direct to customers anyway, as MoDaCo's Paul O'Brien later received a handset featuring the illegitimate modified CE symbol.

Fixed the CE logo or reshipped directly to circumvent the problem? Obviously the latter! pic.twitter.com/YxJlQTXiar

The latest faux pas from OnePlus came yesterday, as it launched its latest contest to give potential buyers the opportunity to compete for an invite to be able to buy the handset. Called 'Ladies First', it encouraged women to "draw the OnePlus logo on a piece of paper or on your hand/face/wherever" and then take a photo of themselves and post it in a thread on the company's forums to be judged.

According to the terms, "the 50 most well-liked ladies" in the contest - presumably those that a bunch of men had decided were the hottest - would receive an invite and a t-shirt bearing the company's 'Never Settle' slogan, while a further 100 invites would be randomly given out to a random selection of other female participants. 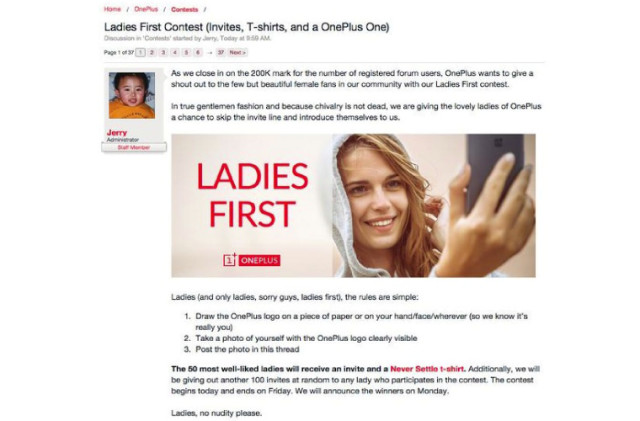 OnePlus itself said that there are "few but beautiful female fans in our community", and that the vast majority of its forum members are therefore male. Perhaps unsurprisingly, there has been considerable backlash across the web since the contest was first launched, with many criticising the company both for running such a sexist competition, and for its evident lack of respect for its female audience.

Predictably, OnePlus has now pulled the competition completely and, in a statement to Engadget, explained:

OnePlus is thrilled to have a small but growing number of women active in our online community. We want to encourage even more women to get involved with and excited about the amazing things happening in tech right now. The 'Ladies First' contest was a very misguided effort by a few isolated employees to do just that, however there is no question the post not only failed to better include our female community but actually perpetuated a stereotype that OnePlus in no way supports or condones. We deeply regret any offense caused by this contest."

This might just be the company's most stupid move since it invited people to smash up their flagship phones in the hopes of winning the chance to be able to buy a OnePlus One. If you need any convincing of why that's a bad idea - apart from the obvious possibility of not winning - see what happens when enthusiastic morons take a hammer to a smartphone battery.