According to both research firms Gartner and IDC, worldwide PC shipments have fallen in Q2 2013 by around 11% year-on-year. There were approximately 76 million PC shipments in the second quarter of this year, down from approximately 85 million the same time last year, which accounts for the negative growth, marking the fifth consecutive quarter of declining shipments. 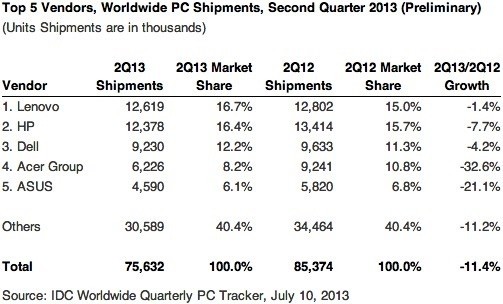 Gartner and IDC seem to agree that people are choosing to pick up cheap tablets over cheap laptops and other PCs, which is accounting for some of the decline especially in emerging markets. In the previous quarter, IDC liked to lay some of the blame on Windows 8, however this time around both have refrained from slamming Microsoft's OS, with Gartner's Mikako Kitagawa especially mentioning that this assumption is "unfounded".

While Windows 8 has been blamed by some as the reason for the PC market’s decline, we believe this is unfounded as it does not explain the sustained decline in PC shipments, nor does it explain Apple’s market performance.