With Apple’s iPhone 4S apparently failing to excite consumers, and many left wondering what happened to the iPhone 5, it seems there's now an opportunity for Apple’s rivals to grab some headlines and show off their new handsets in time for the holiday season. Those most likely to be rejoicing over the tepid reaction to the new iPhone will surely be Microsoft and Nokia.

Microsoft, of course, recently released the greatly anticipated ‘Mango’ update to its Windows Phone operating system, and its rollout seems to be going rather well so far. The first handsets with Mango – or Windows Phone 7.5 – on board are already on sale in some markets, from Fujitsu-Toshiba, HTC and Samsung, but the devices that many are still waiting for are those from Nokia.

Precious little is known about Nokia’s first Windows Phones, although alleged specifications for three devices – codenamed Searay, Sabre and Ace – leaked last week. MonWindowsPhone.com has now received a copy of an internal document from Orange France, claiming to list availability of a range of new phones, including a Windows Phone called the 'Nokia Sun', with the following specifications: 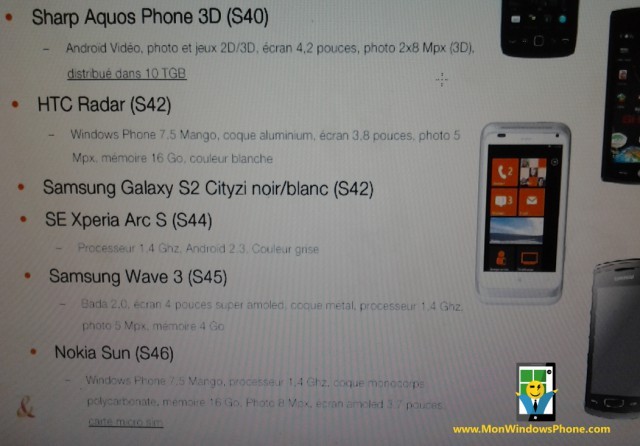 These specs align with those previously leaked for the Searay, and it’s claimed that the device would be available in week 46 (week beginning 7 November). The document also indicates that HTC’s Radar – another new Windows Phone 7.5 handset – will be available on the same network in week 42 (week beginning 10 October, i.e. next week). If that turns out to be true, it would certainly lend some credibility to the document’s other contents.

But it’s curious that Nokia would apparently be eschewing its own new three-digit handset numbering system in favour of naming the device ‘Sun’. Another leak at the end of August appeared to show a new Windows Phone called the Nokia 703, with specs that seem to match those of the Sabre, and it certainly seems more likely that Nokia would apply its new numbering convention to its newest handsets.

It is possible, though, that Nokia intends to use both a number and a name to identify its Windows Phone devices. WPCentral reports that a “Nokia Lumia 800” has recently been identified as a Windows Phone, but it’s anyone’s guess as to what specs that handset might have.

Indeed, it’s best to file all of this under ‘speculation’ for now – but thankfully, the wait for concrete information is almost over. Nokia’s first Windows Phones will be announced at the company’s Nokia World conference in London on 26-27 October.