After a slightly troubled start, the dust has finally started to settle around the Xbox One. Despite controversies surrounding internet requirements and Microsoft's policies on used games, it seems that many gamers have been unfazed by these brief scandals, with both Amazon and Best Buy reporting sell-outs of their pre-order allocations for the new console. 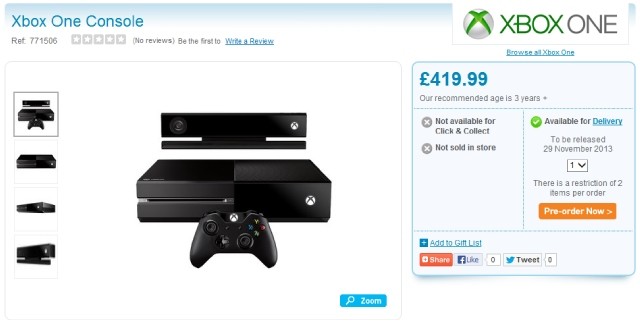 But one big question mark continues to hang over the Xbox One - when will it arrive? CNET UK reports that global retail giant Toys R Us has updated its pre-order page for the console, stating that it is due "to be released 29 November 2013", two weeks ahead of the 13 December date that the retailer claims for the PlayStation 4.

Of course, it remains to be seen whether those dates will prove accurate; retailers often use placeholder information when key details have not yet been finalised. Even so, those are unusually specific dates to be citing so far in advance.