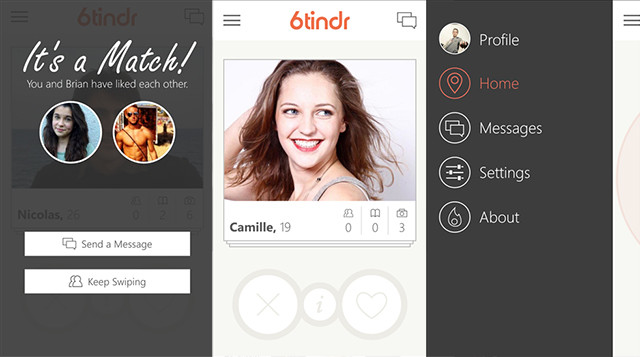 Last year, Microsoft named Rudy Huyn the official "Next App Star" for his Wikipedia app, but the company probably didn't know how prophetic that title would be. Huyn has added to his legacy as the top third-party developer of Microsoft's smartphone platform, releasing the 6tindr app on Wednesday.

As its name implies, 6tindr is an unofficial version of the popular Tinder dating app, which is currently only available on iOS and Android. As 6tindr's app description states, Tinder "shows you someone nearby it thinks you should know, and lets you anonymously like or pass on them." If both users like each other, the 6tindr will allow them to chat within the app, as with the official versions. Both 6tindr and Tinder require a Facebook account.

Huyn's new app joins his stable of apps he's created when the official developers have declined to do so. In addition to the Wikipedia app, Huyn has released third-party apps for Vine (6sec), Instagram (6tag), Snapchat (6snap) and 9Gag. Huyn has also created several original Windows Phone apps.

Official apps for Vine and Instagram were released well after Huyn's third-party versions came out. Huyn's apps have maintained better user ratings, however, and even include features not available on the official apps. Unlike the official Instagram app, for instance, 6tag users can create collages and sign in with multiple accounts.

Microsoft has lured many big-name developers with up to $600,000 to bring their apps to Windows Phone, yet Huyn is releasing versions better than their official counterparts for free. Maybe you should redirect those investments, Microsoft.